Coming up amid the 1970s at their least attractive 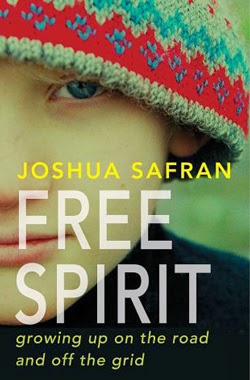 Joshua Safran's memoir, Free Spirit: Growing Up On the Road and Off the Grid, wasn't quite what I expected it to be. On the basis of Maureen Fiedler's interview with Safran on Interfaith Voices, I thought I'd be reading about a young man unfortunate enough to have been brought up in a lesbian-separatist Wiccan collective in the 1970s. That's an environment I have some familiarity with; though I always thought those folks were missing much of life, I certainly knew enough of them in San Francisco in that time.

In fact, the Wiccan separatists barely have a bit part in this book. Rather, this is the chronicle of Safran's mother Claudia's serial relationships with progressively more useless -- and finally violently abusive -- men while her precocious son dragged himself up through miserable physical conditions and the fog of her unhinged anarcho/leftist/hippie fantasies. Claudia was determined that her son absorb the miscellany of half-baked, vaguely countercultural notions that swirled through the San Francisco Bay Area in the '70s. Many of these ideas had some thoughtful, intelligent exponents. Claudia wasn't one of these; she seems to have grabbed on to them in sequence as they flew by, much as she grabbed on to a series of lovers.

The young Joshua seems to have understood something was amiss from a very early age. He describes a trip when he was about five with his mother and the lover of the moment:

"The outdoor bathing concept became so popular with Bob and Claudia that we started screeching the van to a halt at the first signs of standing water. We were soon bathing in lakes, streams, and pools of brackish effluent. Watching them frolic in the water before me, I detected something familiar in their playfulness. They were acting like children. Which was weird because I felt like an adult."

A short foray into a public school system taught him how different his upbringing had made him from his age peers.

It was a thousand little clues that, taken as a whole, added up to a startling and unsettling conclusion. They were all straight. Every single one of them. I was the only kid who wasn't. It was me who wasn't normal. … Of all the nicknames I received in first grade -- including Big Nose, Elvis (because of my hairdo), and Josh Doesn't Wash (which had some truth to it) -- the most accurate was probably E.T. My failure to speak a common language undeniably set me apart, but my fundamentally differing conception of reality was positively extraterrestrial.

Mostly what comes through in this account is the horrors of miserable rural poverty. Safran's mother was never very employable and much given to chasing after her latest magical delusion about how they'd live. The mother and son (and the man of the moment) slept in broken down vehicles, sheds and tents in the rain forests of the Northwest; covered themselves with rags; and often didn't know where their next meal was coming from. This is rural poverty, honestly recounted and only unusual in that the lead actors are mostly whites. Their neighbors in suffering seem to have run to Mexican migrant workers and Native Americans. The book is worth reading simply for its stark recounting of life at the bottom. Millions of children still grow up in circumstances nearly as awful as these.

Eventually young Joshua and his mother had had enough. She fled the last alcoholic and violent lover. The young man rejected her rebellion against the conventions of U.S. society. Somehow he survived high school and went on to Oberlin College and become a lawyer in Berkeley who advocates for survivors of domestic violence.

Safran explains what became his anchor as he dug himself out of this unpromising beginning:

Judaism became my rebellion. I had come to believe that everything that animated my mother was painfully contrived. Her 1970s Wiccan spirituality, her Marxist political perspective, her anarchist Utopia. These were all fabricated fads as outdated as their human creators. I craved authenticity, .. a tradition …

This conclusion -- only touched upon briefly in the book -- explains why Safran seemed an appropriate interview for Interfaith Voices. I get it too. After all, somewhere along the line, I become an Episcopalian, seeking a tradition with some seasoning behind it. I'm less dismissive of the excesses of the 70s than Safran, but I didn't begin to suffer from them as he did.

This is an interesting book about a cul-de-sac within our national experience that is disappearing from memory. I'm glad it exists.
Posted by janinsanfran at 5:00 AM

The 70's lives on in Puna, on the Big Island of Hawaii.