And there is still no room at the inn ... 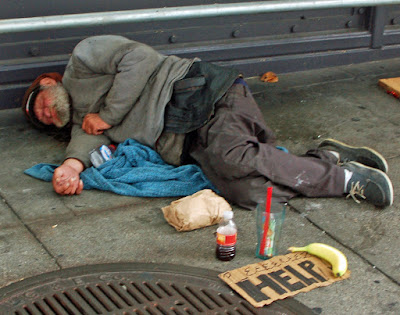 Donald Trump doesn't think much of the United Nations. Like people in so many countries in the world afflicted with terrible governance, citizens of the U.S. need the U.N.'s aspirational human rights framework to ground our efforts to critique and cajole our rulers to uphold a universal vision of a just and peaceful world.

In December, Professor Philip Alston, a feisty Australian human rights lawyer who serves as the current U.N. Special Rapporteur on extreme poverty and human rights toured this country in December. He couldn't go everywhere, but concluded his visit with a lot to say. San Francisco was one of his stops. Here are some excerpts describing what he saw:

The United States is one of the world’s richest, most powerful and technologically innovative countries; but neither its wealth nor its power nor its technology is being harnessed to address the situation in which 40 million people continue to live in poverty.

... I witnessed a San Francisco police officer telling a group of homeless people to move on but having no answer when asked where they could move to...

I also saw much that is positive.  I met with State and especially municipal officials who are determined to improve social protection for the poorest 20% of their communities, I saw an energized civil society in many places, I visited a Catholic Church in San Francisco (St Boniface – the Gubbio Project) that opens its pews to the homeless every day between services ...

Successive administrations, including the present one, have determinedly rejected the idea that economic and social rights are full-fledged human rights, despite their clear recognition not only in key treaties that the US has ratified (such as the Convention on the Elimination of All Forms of Racial Discrimination), and in the Universal Declaration of Human Rights which the US has long insisted other countries must respect.  But denial does not eliminate responsibility, nor does it negate obligations.

International human rights law recognizes a right to education, a right to healthcare, a right to social protection for those in need, and a right to an adequate standard of living.  In practice, the United States is alone among developed countries in insisting that while human rights are of fundamental importance, they do not include rights that guard against dying of hunger, dying from a lack of access to affordable healthcare, or growing up in a context of total deprivation. ...

In many cities, homeless persons are effectively criminalized for the situation in which they find themselves.  Sleeping rough, sitting in public places, panhandling, public urination (in cities that provide almost zero public toilets) and myriad other offences have been devised to attack the ‘blight’ of homelessness.  Ever more demanding and intrusive regulations lead to infraction notices, which rapidly turn into misdemeanors, leading to the issuance of warrants, incarceration, the incurring of unpayable fines, and the stigma of a criminal conviction that in turn virtually prevents subsequent employment and access to most housing.  Yet the authorities in cities like Los Angeles and San Francisco often encourage this vicious circle. ...

[On combating poverty using "new information technologies"]
... Much more attention needs to be given to the ways in which new technology impacts the human rights of the poorest Americans. This inquiry is of relevance to a much wider group since experience shows that the poor are often a testing ground for practices and policies that may then be applied to others. These are some relevant concerns.

A coordinated entry system (CES) is, in essence, a system set up to match the homeless population with available homeless services. Such systems are gaining in popularity and their human rights impact has not yet been studied extensively. I spoke to a range of civil society organizations and government officials in Los Angeles and San Francisco about CES.

A civil society organization in San Francisco explained that many homeless individuals feel deeply ambivalent about the millions of dollars that are being spent on new technology to funnel them to housing that does not exist. According to some of my interlocutors, only a minority of those homeless individuals being interviewed actually acquire permanent housing, because of the chronic shortage of affordable housing and Section 8 housing vouchers in California. As one participant in a civil society town hall in San Francisco put it: “Computers and technology cannot solve homelessness”.

You can read the whole report at this link. It's only about five pages and easy to understand. Now if only we could do something about its findings.

Now and again I look at Zillow to see what property costs. I don't plan to move most of the places I check, but it's curiosity when i know someone who lives there. California is pretty much pricing the middle class out of housing in any of its bigger cities and some of its smaller ones. We've been heading down a road to lords and peons for some time and for some, left and right, that's how it should be.

Homelessness is more of a problem as illness or lack of a job can throw some people out. Reagan started street begging when he ended housing the mentally ill. I'd seen beggars in Mexico but not up here until after that. My mother though talked about it after WWII and i know my father in law once said he got arrested for vagrancy in a small southwestern town because he was riding the rails during the Depression. So this is an off and on problem. It's hard to say how bad it is since some of the supposed homeless have chosen it and some have been forced into it. Some are mentally ill and should be protected for their own good and that of others.

This last week, my husband was walking with our son in a small town in the Willamette Valley and said he heard a loud, threatening argument between two people down along the river, a homeless area. My husband and our son were walking on sidewalks in the shopping part of the town-- so in that town, the homeless are nearby. This is a liberal town and nobody gets arrested for loitering and there are food kitchens provided. Portland, a much bigger town in Oregon has the mentally ill threatening those going to work and on the streets, some drugged out of their minds, others watching everyone who goes by. They used to be in one district but these days they are right downtown. Homelessness grew exponentially under Obama but he didn't want it. Trump doesn't either. The thing is what do you do about the mentally ill before they hurt someone? What do you do about druggies who have chosen that at some point and maybe now can't change it-- or don't want to? What do you do about people who can get more money begging than working? In the past, hospitalizations for the mentally ill were forced. Today that can't be done even for someone everyone knows is dangerous (thinking the Tucson shooter for some years back).

Even if we could provide housing and some cities are building tiny houses for the homeless, we have only to look at housing developments for the poor to see how that goes. I know some want to blame the heartless GOP but neither party has a real solution to this. Dems throw money at it and if you look, you find most goes to salaries for bureaucrats and not directly to those out there. Jobs would help some but frankly some of the homeless don't want regular jobs and couldn't hold one down if they tried. Sometimes I give money when I am in areas where I know they are by keeping some in my pocket but I know that's not recommended. It also doesn't help.

And on the UN running our country, i suspect only about 25% of Americans, the farthest left, would trust the UN to do that. Globalism versus nationalism is again one of those dividing issues between left and right (and nationalism does not mean racism or bigotry. It means control of your borders, making your own laws, and deciding where your capitol will be) There is no way I'd trust the UN to rule over us and the right (that 25%) would get out of it.

I wish you and yours a warm and dry Merry Christmas.

There is no god.