For the record: what we know right now about Trump/Russia 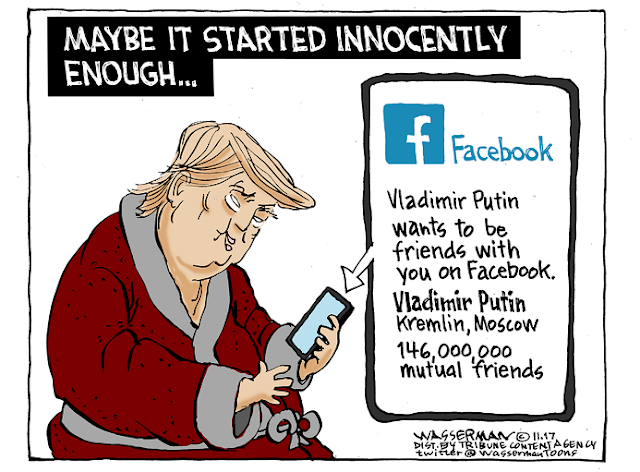 Amid the rumors that the Great Cheato is about to try to scuttle the Robert Mueller's investigation into his campaign and transition staffs' extra-legal undertakings, it can't hurt to have a succinct summary of what has already leaked out into public knowledge:

Because Mueller is inexorable, the desperation in Trump world is palpable. We know that senior officials in the Trump campaign wanted to collude with the Russians in order to influence the election. (Donald Trump Jr. has admitted meeting with a Russian lawyer in June 2016 to get damaging information on Hillary Clinton.) We know that Russian intelligence had the means to influence the election, hacked from a variety of sources. We know that Trump officials tried to conceal their contacts with the Russians, while seeking policy changes favorable to Russian interests. We know (on the credible testimony of a former FBI director) that President Trump tried to shut the investigation of these matters down. And it is a good bet that Mueller knows far more about all of this than we do.

The source is of this paragraph is Micheal Gerson of the Washington Post, "a top aide to President George W. Bush as assistant to the president for policy and strategic planning." Not exactly the sort of guy who one might expect to be dishing on a Republican president -- any more than the Republican FBI guy Mueller is such a person.

I'm not one who thinks the Mueller investigation is going to bring Trump down; his acts against the interests and desires of the people of the United States are going to do that, sooner or later. But this is what we know now.