The bill is too damn high: the medical market fails us 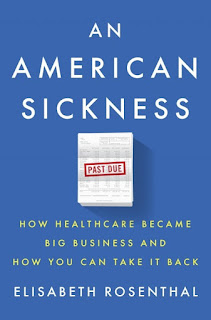 Why didn't the Affordable Care Act (ACA) -- that's Obamacare -- rapidly earn more fans when it managed to add 20 million people to the number covered by some kind of health insurance? Because, from the point of view of many (most?) of us who have tried to access medical care whether or not on Obamacare, that necessary good still cost an arm and leg -- or at least too damn much!

Elisabeth L. Rosenthal's An American Sickness: How Healthcare Became Big Business and How You Can Take It Back dissects the grim truth:

In the past quarter century, the American medical system has stopped focusing on health or even science. Instead it attends more or less single-mindedly to its own profits.

Rosenthal is a physician with a degree from Harvard Medical School and and journalist with twenty-two years experience working for the New York Times on a variety of beats including Beijing, bird flu, and environmental degradation. Back in New York, she covered adoption of the ACA and moved on to researching the cost of U.S. medicine. (She's now editor-in-chief at Kaiser Health News.)

In this utterly readable volume, Rosenthal lays out through anecdote and expertise what has gone wrong in the delivery of medicine. Separate chapters explain how all facets of the system have organized themselves over the last 25 years to extract maximum cash from largely defenseless patient/consumers. We're being ripped off every which way -- by insurance companies, hospitals, doctors, drug makers, medical device vendors, lab testing and other ancillary service contractors, and increasingly by monopolistic health conglomerates.

The second half of the book is as deep and detailed as Rosenthal's description of the problem. She is full of ideas about how to fix this foul cesspool of exploitation of human helplessness. She explains what individual patients should question and what they should protest; she even provides sample letters. She makes suggestions for how play various parts of the system off against each other, such as insurance companies, doctors, and pharmacists; make 'em work for your business. She has solid suggestions for collective political remedies, particularly in the area of strengthening and making responsive the various state-level insurance commissioners. (This caught my attention because California made this an elected position by initiative in 1988 and some subsequent occupants been quite useful to patients.) There are numerous state and regional regulatory tweaks that could help some.

But ultimately the federal government is going to have to root out the greed that defines the healthcare system. Obviously with the party representing the One Percent in power, that's not currently happening. But we can and will demand better; it is our lives at stake. Rosenthal reminds us, patients do have allies within the system:

There are many great doctors, nurses, pharmacists, and others working their hearts out, even in these troubled and troubling times. Even as the healthcare sector faces a future of great financial uncertainty and humiliating bureaucracy, many of the best and brightest students are flocking to medical school. They're doing it because they want to take care of patients ... We have to remind everyone who has entered our healthcare system in the past quarter century for profit rather than patients that 'affordable patient-centered, evidence-based care' is more than a marketing pitch or a campaign slogan. ... When the medical industry presents us with the false choice of your money or your life, it's time for us all to take a stand for the latter.

Here are Rosenthal's Rules for understanding the U.S. medical system to ponder; click to enlarge: 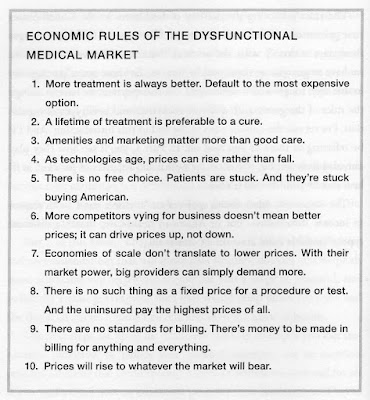 ***
Want to think about how serious this is? We understand what is happening. Today in a discussion of how Republican tax cuts aim to undermine Medicare, one elder offered a suggestion:

I was discussing this legislation with my younger sister, and pointed out the obvious, which is that I probably will not survive long since I am facing a 9K copay on my cancer drug alone when I go on Medicare in a couple of months (this is not hyperbole). She suggested that when the time comes to expire, maybe I could plant myself near an entrance to the Senate chamber. I know the timing would be difficult, but I am intrigued by the idea. Could be my last act as a public educator.

Rosenthal would recognize this sentiment and this determination.
Posted by janinsanfran at 5:00 AM

Healthcare along with many other things has been crushed by the fist of big business.