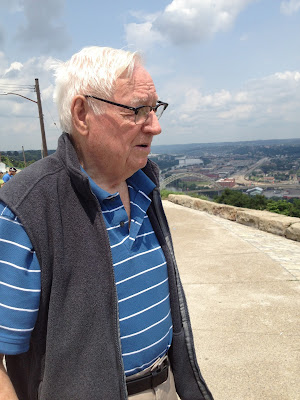 From Fred Downing, I learned that nothing can be cooked properly if it doesn't begin with onions and peppers. I learned that bad puns charmed some people, even if not me. I learned to set up a rudimentary shelter in the rain, dig latrines, chop wood, light fires, hike up mountains --- and, most of all, to organize others to perform these anachronistic skills efficiently enough so they enjoyed the experience. Whatever success I've had as a political and community organizer began with those lessons.

All that was a very long time ago, five decades in fact. Fred died this year at age 100.

He was a New Englander, at various times an executive of the Maine State Employees Association and director of the Vermont Civil Service. He served in the Navy during World War II, emerging a Lieutenant Commander. He was a guidance counselor in several Maine high schools and taught generations of young women at summer camps to live in the outdoors. For several memorable years in the late '60s, he dragged groups of us along on his quest to hike to all the 4000 foot high summits in New Hampshire; some of those were undistinguished little peaks, but I don't remember resenting his obsession. New things to see!

After retirement, Fred needed an outlet, so for seven years he created a program in computer literacy for inmates of the Kennebec County Jail. He took us to visit one time; this was truly Maine, the only jail I've ever seen with no visible black inmates.

After the death of his wife Judy Downing, Fred lived on for 12 years near his daughter in Pittsburgh, PA. He was an enthusiastic tour guide of his adopted home town. In the photo, that's Fred at age 97 pointing out the sights from the city's Mount Washington overlook.

On a visit some years back, I pointed out to him that I was approaching retirement age myself. He was almost indignant: "So what do you want to do with the rest of your life?" The end of particular jobs had never slowed him and he saw no reason it should slow me. Why I might have 30 or so more good years ...

As often before, he'd jarred my thinking. I blurted what came immediately to the top of my mind, "Go outside."

I've done a few other things and intend to do more, but ever since I've made sure to "go outside," whether running ultra-marathon distances, hiking in bucket list places, or walking the pilgrimage, the Camino de Santiago.

Thanks Fred, for all I learned from you. Through whatever pain came, you demonstrated how to live well.
Posted by janinsanfran at 5:00 AM

Email ThisBlogThis!Share to TwitterShare to FacebookShare to Pinterest
Labels: gone but not forgotten, running