Game change? or not? 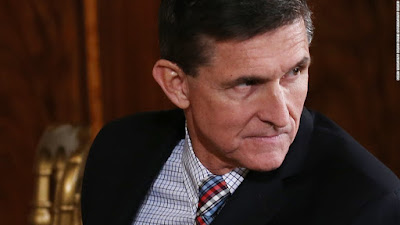 I'm not feeling it. Flynn is pleading guilty to something we've known since last February: he talked with the Russian ambassador during the transition about sanctions and lied about it to the FBI. For an Intelligence guy he's not too bright; didn't he know that the U.S. almost certainly would be listening in on the Russian?

And as for Flynn's boss, the Orange Cheato, he publicly solicited help from a hostile foreign power (that would be Putin's Russia) during the campaign. I heard it myself when trapped in front of a cable news feed on a ferry in late July 2016. We know that. I happen to think Trump's behavior was (and is) treasonous; his disavowal and destruction of the more decent elements of our polity give aid and comfort to our enemies. But a sizeable minority of us -- well distributed -- thought not and put him in the White House.

Mueller can prove Trump's misdeeds -- mostly done in the full light of day -- and still achieve nothing unless Republicans decide the con man has outlived his usefulness and impeach him. Perhaps they might get around to that when they've given their rich donors their tax cut? We'll see.
Posted by janinsanfran at 5:00 AM

I think once the tax bill is law, Trump is expendable. The reptilian Republicans won’t bother to save him when they have gotten the oligarchy they wanted. It will be cold comfort to see him go.

Thank you. I wasn't impressed by any of this either. The damage to our country are continuing.