It's fun when we win, isn't it? Alabama friends are beside themselves with delight.

David Wasserman summed up how it happened succinctly:

No doubt about it: Major, metro Alabama and the Black Belt came through for Jones. Voters in rural white counties didn’t move much towards Jones, but they utterly failed to turn out for Moore.

As someone observed, if a state election gave the same disproportionate weight to rural areas as the Electoral College does in presidential contests, Roy Moore would be a Senator. But, so far, that's not how it works; majorities win.

Perry Bacon made a pertinent observation:

One of the important features of the Jones-Moore campaign is that even though the Democrat was running in a heavily Republican state, he was not forced to take any stands that really differ from Democratic orthodoxy. He made no specific commitments to back any part of Trump’s agenda. He is likely to be the 49th “no” vote on most Trump initiatives.

That's important. Democrats from very conservative states, like West Virginia's Joe Manchin, sometimes awkwardly try to shore up their elect-ability by adopting a few conservative positions. Jones didn't do that in the campaign, actually running as pro-choice, so he's not likely to do it in office either. (Except maybe on guns ...)

After all the discussion about how evangelical voters were sticking with the alleged-pedophile, Bacon also put out this chart (using PRRI data) showing the current national religious breakdown. Self-identified evangelical Christians make a lot of noise (and the label certainly fits most Alabama Republicans.) But the actual picture is more varied and getting more nuanced every year. 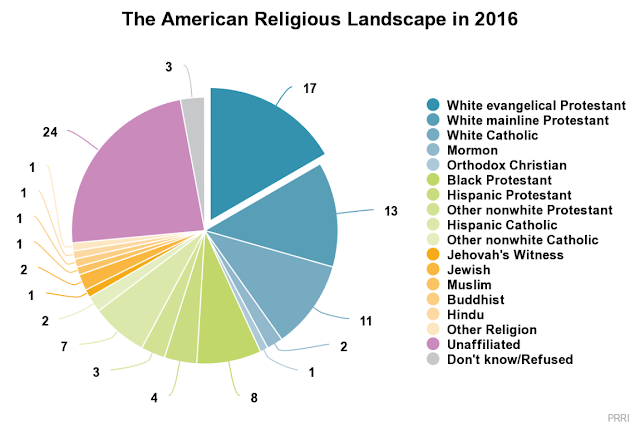 We're a much more religiously diverse country than it sometimes seems.
Posted by janinsanfran at 5:00 AM