When war was made illegal 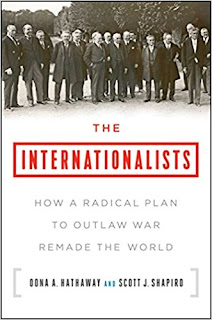 As it happens, I was raised to mock the Kellogg-Briand Pact of 1928 as the ultimate in callow idealism. My mother studied international relations briefly at the Zimmern School in Geneva, Switzerland that year; what she took from the faculty and distinguished lecturers like John Maynard Keynes was that the statesmen from 63 nations who signed the Paris Peace Pact, outlawing war as an instrument of national policy, were either naive or hypocritical. The subsequent Japanese invasion of Manchuria, ascendancy of the Nazis in Germany, Italian conquest of Ethiopia, collapse of the League of Nations, and eventually World War II absolutely confirmed her conclusion. And she was not alone; the Peace Pact dropped out of most historical reckoning.

Oona A. Hathaway and Scott J. Shapiro, a couple of Yale Law School professors, seek to rehabilitate the treaty in The Internationalists: How a Radical Plan to Outlaw War Remade the World. To my surprise, they make a convincing argument that this apparently fruitless project signaled a fundamental shift in the ways nations understood of relating to each, a New World Order within which we still live, however imperiled from multiple directions it may seem.

The Old World Order, the international legal regime these authors attribute to the Dutch defender of early mercantilism Hugo Grotius, relied upon war between states as "a legitimate means of righting wrongs."

Resorting to arms did not signal a failure in the system: It was how the system worked. War was an instrument of justice. Might makes Right.

But it was not just that the Old World Order sanctioned war. It relied on it and rewarded it. All states had the right of conquest: Any state that claimed it had been wronged by another state, and whose demands for reparations were ignored, could retaliate with force and capture territory as compensation. The conquering state thereby became the new sovereign of the captured territory ... Nearly every border in the world today bears witness of some such past battle -- including that of the United States.

That comes off as barbarous, doesn't it? Our recoil is evidence that during the 20th century, most nations actually did come to concur on a New World Order in which war was intrinsically illegitimate, to be avoided if at all possible. This book describes how the authors think we got from a world in which war between states was simply a fact to one in which war and conquest are widely looked at as culpable tears in the global fabric.

They make their argument by highlighting a series of individuals: Grotius who formulated early international law; a corporate lawyer Salmon O. Levinson from Chicago whose movement advocacy helped build the popular demand for a new international order after World War I and the German Carl Schmitt who created a Third Reich intellectual edifice against these peace forces; and Hersch Lauterpacht and Judge Henry Jackson who forged the legal description of an outlawed war used to convict Nazi leaders at Nuremberg. In general, I prefer my history not to consist of a catalogue of the deeds of "great men" but in this instance the authors make legal abstractions approachable through the device.

Above all, Hathaway and Shapiro insist the New World Order heralded by the Paris Peace Pact and made close to universal in the wake of World War II is a reality under which we've now lived for 75 years. Consider:

Yes, the law is still sometimes violated -- think Russia in Crimea and, without territorial seizure, the U.S. invasion of Iraq. But they argue quite convincingly that the economic sanctions which have become the primary enforcement tools for this order do have coercive force, even if that force is not so dramatic as dropping bombs. Certainly that argument is strong enough to be worth mulling. Isolation from international structures is simply not a feasible national survival strategy in a globalized world, North Korea notwithstanding. I think they might insist the rest of the world has simply not sanctioned the Kims vigorously enough to prove this out.

Economic sanctions seem less likely to deter a true international hegemon, but the rise of China and India suggests that the world is entering a period when there isn't one. Multipolarity ahead perhaps?

These authors demand that we take seriously that the history of how we think about war is a species of material reality.

... ideas matter and people with ideas matter. In that respect, the book is both a history of ideas about war and a history of how ideas emerged, clashed and evolved. It is a story, too, of how ideas became embedded in institutions that restructured human relations, and in the process reshaped the world.

I'm enough of a materialist that I react skeptically. We can't think ourselves to a peaceful world. Yet since reading The Internationalists I've found myself digesting rumors of war in a new frame. Take this, for example, from that old conservative war horse George Will. He's understandably appalled that we have a President who might thoughtlessly launch nuclear war. But catch how he describes, for purposes of denunciation, Donald Trump's thinking:

Trump’s foreign policy thinking (“In the old days, when you won a war, you won a war. You kept the country”; we should “bomb the s--t out of [the Islamic State]”) is short on nuance but of Metternichian subtlety compared with his thoughts on nuclear matters: “I think, for me, nuclear is just the power, the devastation is very important to me.”

... It would be interesting to hear the president distinguish a preventive war against North Korea from a war of aggression. The first two counts in the indictments at the 1946 Nuremberg trials concerned waging “aggressive war.”

In Hathaway and Shapiro's terms, Will is condemning Trump for bringing Old World Order concepts to a New World Order environment. In the former, it was fine, even laudable, to "take the oil." In a survivable world, it is unthinkable. The New World Order is under assault for illiberal authoritarians wherever they rise up, but I find it convincing that it is realism, not folly, to continue to elaborate, defend, and strengthen this emerging framework.
Posted by janinsanfran at 5:00 AM