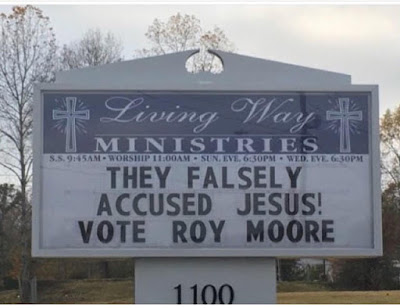 Take it from somebody who has seen this play out:

... the Republican Party has not learned from the mistakes of the Catholic bishops. True, some Republicans are appalled by Moore’s candidacy, but the leader of the party and its national committee have publicly endorsed Moore.

Moore supporters are operating out of the same playbook as the bishops did before they wised up and changed their policies. The accusations are denied. The credibility of the victims is challenged. “Why did they not come forward earlier? Why did they wait so long?” Then the actual offense is minimized. “She was consenting.”

Bishops, because of the shortage of clergy, were often persuaded to keep a priest in ministry because there was no one to take his place. Likewise, the Republicans faced with a narrow majority in the Senate are willing to compromise their ethics in order to maintain their power.

This Church is in violation of its 501(c)(3) status and should be investigated by the IRS.

So it's an actual church sign and not a church-sign generator message. Newsweek reports that the church was deluged with phone calls in protest.

Brandon: yes, I checked as best I could online to be sure this wasn't a Church Sign meme generator before putting it up. Gotta check these things.