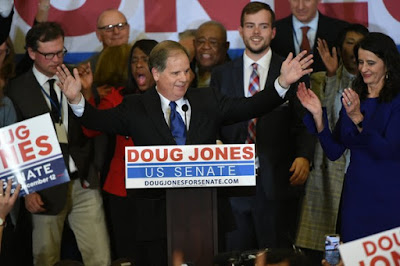 Joe Trippi is taking a well deserved star turn, basking in deserved applause for having served as the chief media strategist on Democrat Doug Jones' winning campaign for the Senate in Alabama. If the name is familiar, you've probably been attending to politics for awhile. Trippi's prior claim to fame was using the internet (before the prominence of social media at that) to mobilize and fund Howard Dean's anti-Iraq war insurgent campaign for the Democratic presidential nomination in 2004. You better believe, he's back, all over. (See for example here and here.)

It's always hard to know how much sound campaign management contributes to any election. The fraction of any electorate in any race that can be moved either to vote rather than abstain, or to change sides, is almost always minuscule. Campaigns are playing around the margins in any particular race and probably most of them have very little effect except to line the pockets of TV station ad managers and a few consultants. But any campaign operative who comes out of (relative) anonymity to participate in an unexpected win will spin a fascinating story which may even contain lessons for other contests.

Ezra Klein has delivered a heaping serving of Trippi's elixir on his podcast and, somewhat unusually, published an abridged transcript concurrently. This is high quality political junkie candy (even more so on the full podcast) and legitimately thought provoking.

Trippi has a clear story of what happened in Alabama. According to the campaign's polling, once crackpot Judge Roy Moore won the Republican primary, the race was always close.

The day before the Washington Post story came out, we were behind by 1 point, 46 to 45. And the day before the election, we were ahead in our own survey by 2 points. We ended up winning by 1.8. ...We'll never know if we could've won without the allegations. But we had a dead heat before that, and it was all based on their understanding of who Roy Moore was. Alabama knew who he was. And Doug Jones was the guy who took on the Klan, and wanted justice for everybody, and wanted to find common ground. We were in a dead heat in Alabama the day before the Washington Post story. We ended up winning a dead heat in Alabama on election day.

It wasn't only the accusations of about Moore hitting on teenage girls the turned off Alabamans; the Republican was a known bad actor, a racist, a scofflaw who had robbed a Christian charity to enrich himself. The sex charges and Trump's subsequent endorsement may have made the race more tribal and moved it a little toward Moore according to the Jones polling.

In the interview, Trippi keeps repeating the mantra he thinks was Jones' winning message: Jones' promise to try to (re)create "common ground." Other interviewers translate Trippi's postmortem as suggesting Jones spoke for "bipartisanship" or "compromise" but though those words come close in meaning, Trippi always repeats the language "common ground." I am sure the phrase is poll tested and voter approved. Here's how he says it served Jones' campaign, as well as representing Jones' actual position.

I think the big question mark in our heads as we were arguing for common ground was what do rank-and-file Democrats do when they see this? Do we somehow deenergize those people who really are appalled by what's going on with Trump? Again, we're monitoring everything, and what happened was Republican women started to move to us, younger Republicans started to move to us, and the intensity among Democrats didn't diminish; in fact, over time, it kept building and building.

So what I'm saying is in Alabama, we pulled that off. Trump's creating energy among the Democratic base that wants to come out and wants to make the change and wants to do something to fight back against what's happening. At the same time, he's creating enough chaos and divisiveness and hostility that Republicans who would never ordinarily vote for a Democrat say, "Okay, well I've got all the chaos and hostility I can handle right now. I'll vote for somebody who wants to try to find common ground and get things done for me, even if they're a Democrat." And trust me, a lot of people in Alabama had to do that.

Trippi does point out that Jones didn't have to survive a Democratic primary which might have surfaced divisions among Democrats. Not many nominees will be that lucky. However, a message that the people of this country need to remove obstacles (Trump and Republicans) to search for "common ground" might be more popular than some might think.

In talking with Klein (even more in the audio than in the transcript), Trippi focuses on the turn that voters of all races and genders who are under 45 made to the Dems.

It was African Americans, women, and people under 45. And you want to know how breathtaking that move is? Think about this. Barack Obama, nationwide, won under-45s, I think, by 14 points, 15 points. Hillary Clinton won them by 14. In Alabama, Doug Jones won them by 28 points.

This is vital. We are living through a generational transition among the electorate of which Trump and his tame tribe of GOPers nostalgics for white supremacy are on the shrinking side. Their whole politic consists of yelling "STOP!" to a changing country. They are doing their best to get in the way, but they are also losing their majority inexorably. If Dems can offer a plausible future to an emerging generation, Dems win.

I can think of several points that Trippi does not emphasize that certainly were relevant to Jones' victory. Moore ran a lousy, incoherent campaign. Jones had 10 times as much money. Although TV is having measurably less and less influence on elections, it can't have hurt that Jones pretty much had the airwaves to himself. Trippi does credit the TV ads for raising up Jones' biography in the African American community.

Tripp does not explicitly credit the fact that Democratic Party infrastructure barely exists in Alabama with helping Jones -- but Party weakness probably did contribute to his victory. Ossified Party leaders would often prefer to retain their historic control rather than innovating to win. The Jones campaign acquired its own voter data and forged its own relationships with extra-political party leadership in churches and community organizations. It's pretty clear that these sorts of connections, including through the NAACP and other Black groups, were what drove African American turnout. I'm sure it helped that the Jones campaign had either its own money or friendly donors who could throw some cash to these efforts.

The next round in ongoing efforts by Democrats to wrench the country back comes up in a Congressional district in the Pittsburgh suburbs on March 13. It's not promising territory, but neither was Alabama. Stay tuned.

Image via AL.com
Posted by janinsanfran at 5:00 AM

The fact that Moore even was a candidate is the amazing part. He is a sleazy little man, who didn't just try to date and maybe molest girls in his 30s but today, he lied about it. That means he's not a Christian. Why he came that close is the disdain for the Democratic party that many feel. The party elites cost Bernie the nomination in '16 and if he'd have gotten it, he'd have beat Trump-- yes, I believe that. Americans wanted change. They wanted someone who didn't run as an insider as Clinton did. Bernie appealed to the very group that Hillary couldn't win over-- many who voted for Obama. The democratic party proves itself untrustworthy and if they weren't there much in Alabama, it would have helped the dem to win. The media being behind Clinton didn't help her either-- even though she probably thought it would. I keep hoping for a democratic party that will run on responsible governing. I don't see it as it stands as they ignore reality for pie in the sky thinking. I do not though believe that most GOPers are white supremacists. Maybe I'm the pie in the sky person but I think Trump won on other promises that matter to those of color and without-- as if most of us are pure anything.