The elephant in our midst

I guess I am one of those despised cosmopolitans that our rightwing nuts aim to purge from our U.S. collective life. It took a graph drawn by a former World Bank economist and explained by a British journalist to ground my understanding of what so many of my fellow citizens are so mad about that they've stuck us with a dangerous, ignorant egomaniac as president. This is what globalization means in our national life, stupid! (Phrasing stolen from James Carville.)

Explaining the impact of globalization on the societies which gave the planet the Industrial Revolution and mature capitalism is the mission of the first third of British journalist Edward Luce's The Retreat of Western Liberalism. The Washington correspondent of the Financial Times, Luce believes the election of Donald Trump in the U.S., and passage of Brexit in his country, demonstrate that Western democracy may have played out its string. Here's the chart that purports to show why: 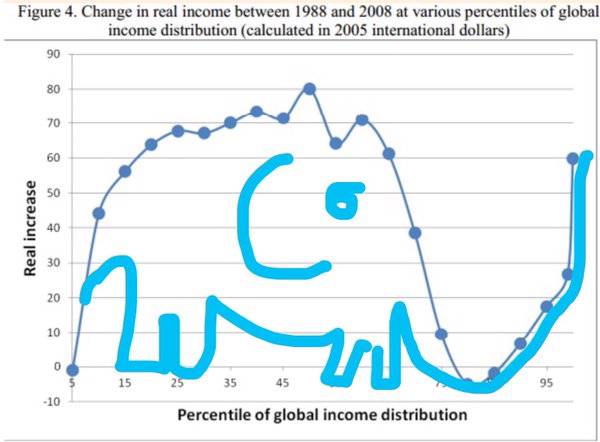 The global median – the emerging middle classes of China, Vietnam, India and so on – enjoyed income growth of more than 80 per cent in those years. Even the bottom deciles, in Africa and South Asia, saw growth of up to 50 percent.

The key part of the elephant for the Western middle classes is where its trunk slopes downwards – between the seventy-fifth and ninetieth percentiles of the world’s population. These account for the majority of the West’s people. At their mid-point, incomes grew by a grand total of 1 per cent over the last three decades.

...The last part of the elephant is the tip of its trunk, which shoots straight upwards in a suitably celebratory posture. That is the global top 1 per cent. Their incomes have jumped by more than two-thirds over the same period.

For most of the planet's people, life has been getting better for a couple of decades. We should be happy about that; a world where a few enjoy outrageous wealth while masses starve is repugnant. And most people in the U.S. do live unimaginably more comfortably than our grandparents. But our prospects are no longer on an upward trajectory. The losers from globalization are the people who have been the foundation of liberal democracies in the U.S. and Western Europe.

Donald Trump, and his counterparts in Europe, did not cause the crisis of democratic liberalism. They are a symptom. ...The backlash of the West’s middle classes, who are the biggest losers in a global economy that has been rapidly converging, but still has decades to go, has been brewing since the early 1990s. In Britain we call them the ‘left-behinds’. In France, they are the ‘couches moyennes’. In America, they are the ‘squeezed middle’. A better term is the ‘precariat’ – those whose lives are dominated by economic insecurity. Their weight of numbers is growing. So, too, is their impatience. Barrington Moore, the American sociologist, famously said, ‘No bourgeoisie, no democracy.’ In the coming years we will find out if he was right.

... We are taught to think our democracies are held together by values. Our faith in history fuels that myth. But liberal democracy’s strongest glue is economic growth. When groups fight over the fruits of growth, the rules of the political game are relatively easy to uphold. When those fruits disappear, or are monopolised by a fortunate few, things turn nasty. ...We like to believe that our democracies are sustained by a shared commitment to principle. In some respects that is true. But when growth vanishes, our societies reveal a different face. Without higher growth, the return of racial politics looks set to continue.


Given the trajectory of the world we live in, that's a dire conclusion. And, as a good Financial Times correspondent, Luce doesn't even address the possibility that economic growth, that engine of relative social peace and heightened well-being for most humans, may be an existential threat to the sustainability of most contemporary life forms on our fragile planet, causing climate change and ecological collapse.

Luce brings historical imagination to our times and the result is not encouraging.

... the parallels between the world today and the world in 1914 should strike us forcefully. Then, as now, the world’s big economies were deeply intertwined. The decades preceding the First World War marked a peak of globalisation that the world economy only regained in the 1990s. Like today, people believed ever-deepening ties of commerce rendered the idea of war irrational. It was thus unthinkable. People had grown complacent after decades of peace.

... Can the West regain its optimism? If the answer is no – and most of the portents are skewing the wrong way – liberal democracy will follow. If the next few years resemble the last, it is questionable whether Western democracy can take the strain. People have lost faith that their systems can deliver. More and more are looking backwards to a golden age that can never be regained. When a culture stops looking to the future, it loses a vital force.

This lucid little book can be read, and understood, in about three hours. It is bracing -- an ice water bath, if you care about democracy and our troubled world. Yet even this determined "realist" can imagine unexpected sources of hope. Before being employed in Washington, he was for several years a correspondent in India. He is convinced, as everyone more observant than Donald Trump must be, that the center of international gravity -- economic and political power -- is shifting to Asia. And much to his surprise, he sees a "natural experiment" taking place on that continent. From personal observation, he is pretty sure that India, though currently lagging China, points to a more encouraging future vision:

So ingrained is India’s culture of noisy dissent and sheer pluralism that I would rate democracy as now safer in India than in parts of the West.

Perhaps both the English language and democracy have their future in the sub-continent. So much for the raj indeed. History is funny that way.
Posted by janinsanfran at 5:00 AM

This description of the contradictions experienced and abetted by the Social Democratic Party in Germany provides a simple example of Luce's assertion that "democracy, national [self-]determination and economic globalisation" are incompatible.

We haven't really had a system of true capitalism here. We aren't a pure democracy and if we were, Hillary would be president based purely on the vote count. I am not sure anywhere has managed pure systems of either. Humans tend to tinker with any philosophical system. Then, even if we get it right somewhere, those who manage power work to undermine it and gain for themselves. I am not sure true altruism exists either-- people gain from what they do and some feel better at helping others-- while while benefiting somewhere else that hurts others. I know-- sounds cynical.

I'll comment soon, but there's a family medical emergency. This is off topic, but I went to Marianna's memorial. It wasn't a formal funeral, but it was a get-together of family and friends held Wednesday at her house.

Brandon: so glad you were able to attend Marianna's memorial. She was a good friend.