A reckoning is coming ... 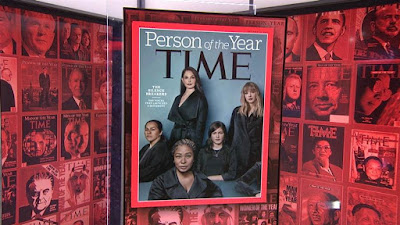 And that reckoning has become partisan. That's a good thing. In order for a social change to take root, at least one of our major political parties has to adopt it. Change doesn't emerge from political position papers; it bubbles up among constituencies. Parties take up formerly unthinkable causes -- think racial integration, or transgender rights, or sensible gun control, or even what I think are crackpot nods to "religious liberty" -- when the change has already percolated through parts of their base. Leaders find they have no choice and "evolve." After awhile, the novelty becomes just part of what we expect from Democrats (somewhat frequently) or Republicans (less frequently -- who needs novelty when you have plutocrats?).

So John Conyers had to go despite his record as the longest serving Congressman and Black Caucus groundbreaker. Al Franken has to go, despite being a pretty darn good Senator with a sense of humor. I would expect Congressman Kihuen to go soon enough. Men who think it their right to impose their sexual desires on women will discover such conduct is an impediment for career advancement among Democrats. Women who want to work in politics will be more likely to be believed when one of these guys violates their limits. Given the deep, deep extent of male certainty that men are entitled to women's attractiveness and availability, there will be back-sliding, awkwardness and actual transgressions. But gradually, we'll all learn the new dance. It's worth demanding that Democrats get serious about this because after this amazing moment, it can happen.

Meanwhile Republicans are yoked to President Predator and (most likely) Senator Pedophile. They are in no position to respond to this social change, even if they wanted to, and even when it bubbles up from some of their base, as it certainly must. In this moment of change, GOPers may still be able to win elections. But having the Democrats draw the contrast to their newfound principles will still help peel off some doubters.

But, but, Republicans sputter, what about that last Democratic predator president, Bill Clinton? Sorry guys, but the electorate is outgrowing its anchor in the Clinton era. Here's Ronald Brownstein explaining the transition we're living through:

The baby-boom generation, which has voted reliably Republican in recent years, has been the largest generation of eligible voters since 1978. But in 2018, for the first time, slightly more Millennials than baby boomers will be eligible to vote, according to forecasts from the Center for American Progress’s States of Change project. Higher turnout rates among baby boomers will preserve their advantage among actual voters for a while. But sometime around 2024, Millennials will likely surpass them. The post-Millennials, Americans born after 2000 who’ll enter the electorate starting in 2020, will widen the advantage. This generational shift will trigger a profound racial change: While about 80 percent of the baby boom is white, over two-fifths of Millennials and nearly half of the post-Millennials are not.

Where boomer women of all colors thought aggression from powerful men was just something you had to put up with, younger cohorts are learning higher expectations. They can certainly sometimes be cowed or silenced, but they have far more peer and social support for "silence breaking."

Meanwhile, a few conservatives even realize they have their own ancient skeleton in their closets; read Jay Kaganoff calling on Justice Clarence Thomas to resign. Change is happening at a most unexpected moment.
Posted by janinsanfran at 5:00 AM

Although I am aware that you don’t write about your government’s foreign policy, I ask of you and of your EP and whoever is reading me to take a stand about what your government has done about Jerusalem.
Thank you in advance.

Tina: this is the local coalition response. Plus the usual phoning.

So I hope there will be more people protesting than when Israel invaded my country in 1982 and in 2006. Anyhow, we didn't need the support of the good people of the US to kick the Israelis out.