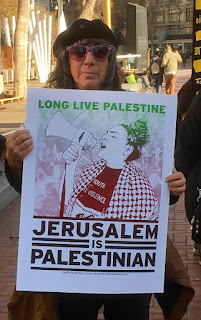 We can take it as a given that, in order to encourage his white evangelical Christian supporters to turn out for aspiring-Senator Pedophile in Alabama, President Predator decided to recognize Jerusalem as the capital of Israel and move the U.S. embassy there. For his evangelical Christian base, this was even more attractive candy than anti-abortion federal judges. Ever since the Israelis occupied the city fifty years ago, the U.S. and Europe have been refusing to confer this mark of legitimacy on that conquest. The "peace process" between expansionist Israel and their subject Palestinian population has long been a sham and the U.S. claim to be an "honest broker" nothing but hegemonic flimflam. Still Trump was ready to roil multiple unstable countries and get some number of protesting Palestinians killed for domestic political gain.

Those of us who are not part of this particular Christian subtribe, "dispensational pre-millennialists," may not realize why advancing Israel's power matters so much to these people. They believe that they are seeing Biblical prophecies of end-times being played out right now, that Jesus will return only when the Jews retake Jerusalem, destroy the Islamic holy mosque which has occupied what was the Temple Mount for centuries, and then rebuild King David's temple. Bloody battles will ensue (no kidding!) and the Jews will accept Christ and all will be hunky-dory for a 1000 years. This is the lovely fable which some 50 million Americans absorbed from such texts as The Late Great Planet Earth and the Left Behind series. They believe it with all their hearts and unhappy souls. And they believe that a serial liar and sexual predator can serve as God's instrument to make it all happen.

Diana Butler Bass, a scholar who writes on U.S. culture and religion, grew up in this tradition though she long ago left it. She's good at conveying how it feels:

When I was a teenager in the 1970s, I attended a "Bible church," a nondenominational congregation that prided itself on a singular devotion to scripture. We read the Bible all the time: in personal Bible study and evening Bible classes. We listened to hourlong Sunday morning sermons. For us, the Bible was not just a guide to piety. It also revealed God's plan for history. Through it, we learned how God had worked in the past and what God would do in the future.

Central to that plan was Jerusalem, the city of peace, and the dwelling place of God. It was special to the Jews because it was the home of Abraham and David. It was special to us because it was where Jesus had died and risen. We believed that ultimately, Christ would return to Jerusalem to rule as its king. We longed for this outcome -- and we prayed that human history would help bring about this biblical conclusion.

Jerusalem was our prophetic bellwether. God's plan hung on its fate. Whenever Israel gained more political territory, whenever Israel extended its boundaries, it was God's will, the end-times unfolding on the evening news. Jerusalem, as the spiritual heart of Israel, mattered. Jerusalem was God's holy city, of the ancient past, in its conflicted present, and for the biblical future.

Almost a decade ago, the documentary Waiting for Armageddon followed an evangelical pastor on a congregational bus tour through holy sites in Palestine; various teachers make sure the tourists understand they are seeing arenas of fortunate future carnage.

"There will be an ultimate final battle and it will be a lot of fun to watch ..."

When not anticipating such jubilant slaughter, this chilling film shows the group belting out the "Star Spangled Banner" under a U.S. and an Israeli flag while riding on a boat on the Sea of Galilee.

Though some references show when it was made (in the film, rumors of war look to Babylon in Iraq, not Gaza and Sana'a), the documentary holds up frighteningly well. Many (most?) evangelicals still believe this ugly stuff; they still want to make it happen; and now they have a friend in the White House.

Here's the trailer. The entire film is available on YouTube and well worth watching.

What is the Episcopalian position on U.S. recognition of Jerusalem as capital?

Brandon: Palestinian rights is not one of those arenas within which the Episcopal Church covers itself with glory -- or demonstrates much courage. Institutionally, we are inclined to admonish all parties to make nice rather than look out for the underdog. This is controversial.