What happened to give us the opioid epidemic? 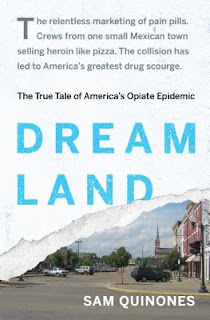 These days you'd have to live under a rock not to know that the U.S. has a raging opioid addiction crisis. According to the National Institute on Drug Abuse,

Every day, more than 90 Americans die after overdosing on opioids.

(For anyone curious, as I was, about terminology: heroin and morphine are derived from the opium poppy and thus are opiates. However pharmaceutical industry chemists have come up with synthetic compounds that act on the same receptors in our bodies, the opioid receptors, including hydrocodone [Vicodin], oxycodone [OxyContin, Percocet], and fentanyl. These drugs, as well as the opiates, are termed "opioids.")

Sam Quinones' Dreamland: The True Tale of America's Opiate Epidemic is a vivid journalistic account of what got us into this sorry situation. The emphasis here is on "what happened" -- he's not attempting to answer "why" so many people might have been vulnerable, though the book is a catalogue of hints. But we can't try to make sense of the "why" without a firm grip on "what happened" -- who, where, and when -- this is terrific reporting in that vein.

Quinones relates how by the 1990s doctors came to believe they ought to prescribe more drugs to relieve pain, how pharma companies, especially Perdue which invented Oxycontin, marketed to maximize profit from that worthy medical impulse, and how other unscrupulous doctors set up pill mills and made fortunes dispensing vast quantities of opioids to addicts who had started on prescriptions. Ordinary capitalist greed teed a plague up to explode.

During the '00s, public health authorities and cops gradually realized something had gone terribly wrong and that the ready availability of addictive medicines had to be curbed. New regulations reduced over-prescription. But as Quinones puts it, the change only meant that decade was "a great time to be a heroin dealer." A brilliantly organized entrepreneurial illicit drug distribution system out of the town of Xalisco in the Mexican state of Nayarit was ready, willing, and able to import their black tar heroin into areas where Oxy and fentanyl had created a plentiful supply of buyers. Their story, culled from interviews with imprisoned and/or deported drug distribution peons, is where Quinones' reporting really shines; heroin came to the heartland not through the Mafia, Central American gangs, or violent drug cartels, but by way of enterprising small businessmen originally united by family ties who thrived on offering reliability and practicing customer cultivation.

Quinones concludes with stories of what came after addiction mushroomed: of children who overdosed, of parents who retreated into shamed silence, and of other parents who became evangelists warning of the danger of drugs. And he shares stories of cops, judges and communities which fought back, which began to treat addicts as sufferers from a disease that required treatment and rehabilitation, and where some pride of place began to return.

Quinones writes a blog where he continues, beyond the Dreamland reportage, to try to explore what this plague means in our national life. He's acutely aware that the addiction epidemic is haunting our national debates, even when it's not in the foreground for many of us.

Politicians would do well to better understand the deep well of pain and anxiety surrounding, and thus the political power within, this issue. It’s not something expressed easily in polls. People aren’t likely to admit to a pollster on a phone that a loved one is an addict.

But it’s there and dims the view of the future of so many people, the prospects of so many towns and counties, the economies of so many regions, and thus is of paramount importance to them. Right up there with jobs – connected inextricably with jobs, in fact. In so many depressed areas, huge numbers of folks can’t pass an employer’s drug test.

Nor does it take many addicts for that foreboding to spread. A few cases in a small town, I think, are all that’s needed. People see it hit almost anyone and seemingly at random – like a plague – including families who before had no connection to the drug world or the criminal justice system. Soon everyone’s view of the future turns negative.

***
The opioid addiction crisis is treated in our public life as peculiarly a contemporary "heartland" phenomenon. Certainly that's the story Quinones tells. But it doesn't seem so far away to this city dweller.

I have friends who came back from being drafted into the Vietnam war who have never overcome drug using habits acquired in that imperial folly. And I have seen a friend get so hooked on opioids prescribed by a high end pain doctor that, whenever she checked into a hospital for treatment of ongoing injuries, she was in danger of suffering through withdrawal because medical personnel would not believe she actually could tolerate the volume of drugs she was habituated to.

Addiction is not solely the story of sad white people in Ohio -- we are an addiction-prone society in which we are taught to hope we can get happiness from a bottle or a pill. It's always worth asking, who benefits when drugs are the available answer to fear, disappointment, and pain?
Posted by janinsanfran at 5:30 AM

This isn't about the opioid epidemic but today, World AIDS Day, I wonder what is being done for children left orphaned by AIDS, especially in America. This Huffington Post article is several years old but describes a paltry situation.

We also have an annual federal allocation of some $2 billion to fund extra support and care for American adults who have AIDS — but the United States has no specific government funding to assist American children orphaned by AIDS or living precariously in families where the parent, usually a single mother, has HIV, the AIDS virus. Some years ago, the Health Resources Service Administration, which administers the annual $2 billion stream which is the main federal money for AIDS, forbade local organizations receiving these funds to use them even to provide grief counseling for children when a parent died. The only exception could be if the child, too, had AIDS. Since most children orphaned by AIDS in the United States — particularly now that treatment can prevent maternal transmission of HIV — do not, themselves, have the virus, this meant only a handful of American orphans would receive support or counseling when their parent died. This ruling provoked one of the few outbursts of advocacy for these children; it was changed to allow “brief grief counseling” on parental death.

The problem with opioids is making sure the right people get a prescription. When I had my hysterectomy, I went home with a prescription that had codeine. I didn't take all of it because I didn't need it after a couple of days. People should only get a prescription for an opioid when nothing else works and with chronic very bad pain. If they get one for a broken leg, it should be short term. What bothers me with all of this is that the people who need genuine pain relief will be denied it. It's been, or so it appears, like antibiotics, given out too readily.

There was a great article in The New Yorker recently that attempted to shame the Sackler family whose name is on every other museum wing in the world for their deliberate marketing of oxycontin as a harmless painkiller to the medical profession when they knew the actual truth. I hope they are shamed out of public existence.

And here's the link: https://www.newyorker.com/magazine/2017/10/30/the-family-that-built-an-empire-of-pain