Chanukah: not "Jewish Christmas" but a liberation struggle recollected 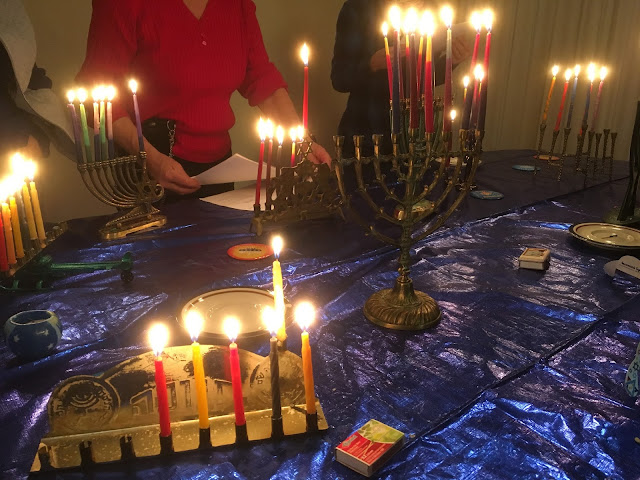 Last night we were privileged to join with a group of long time women friends, most of whom are Jews, in the annual ritual of lighting Chanukah candles. The group's practice is for everyone to bring their household menorahs, the nine-branched candelabras used to mark the holiday, sing more or less tunelessly, and eat latkes (potato pancakes). This last has to do with the enduring qualities of cooking oil which figures in the common mythology of the holiday.

But there's another -- a "non-mythologized" -- story of the celebration. Tikkun Magazine offered a synopsis in 2009: after the death of the Greek conqueror Alexander the Great at the end of the 4th century BCE, the Jewish state of Judea in ancient Palestine became a pawn in the wars of Greek, Egyptian and Persian empires. Urban elites accommodated themselves to their various foreign Hellenistic overlords, letting go of their fiercely monotheistic tribal understanding of the one and only God. But country people suffered inordinate taxes for imperial wars and held on to their historic deity. In the name of that God, they rebelled.

... the [Judean] Maccabees and their followers used guerrilla tactics to win the first national liberation struggle in recorded history. In 165 BCE they retook Jerusalem [from their Seluccid imperial overlords], purified and rededicated the Temple (chanukah means dedication) and rekindled the eternal light that was to glow therein. The fighting continued many years more, but eventually the Maccabees and their descendants (called Hashmona’im) set up an independent Jewish state.

Unfortunately, that state degenerated as the Hashmona’im tried to become a nation like all other nations, adopting the same perversions of state power that other nations adopted, and becoming "realistic" and hence spiritually and morally corrupt. ...

Read much more at the link.

Liberation struggles retain a certain force even when immediate exhilaration fades or even is betrayed. We know in our deepest beings that we long for freedom, even if we don't have a very clear picture of what that means. God is in that longing somewhere. Happy Chanukah.
Posted by janinsanfran at 5:00 AM

Hi. I found your blog while I was trying to research Proposition S. I really appreciate your post from several years ago mentioning the volunteer work you did on that campaign. Unfortunately, it is really difficult to find any information about the campaign or about the Proposition K campaign the following year. Would you consider doing a full post about your experiences? Not just a few sentences tucked into a discussion of a different issue, but a proper post.

In particular, I am interested in what kinds of ads the 2 sides ran, what kinds of arguments the 2 sides put forth, how the 2 sides stacked up in terms of money, volunteers, professionalism, etc. Also, there is one very interesting wrinkle which I would really like to learn more about. I have read that the pro-domestic partnership side actually gave away its campaign money to earthquake relief. Do you remember that and if so, what was the reaction of people on the campaign to that decision? Did people blame that decision for the resulting defeat?

Anyway, I do hope you will consider discussing this part of history. Given the lack of information online about the campaign, it would really fill a gap in the historical record.

Ellen: FWIW, here's the story of "yes on S" and the earthquake of 1989. We did some pretty effective fundraising. Send me an email and I'll answer questions -- as far as I can tell the link in the right column works.

About “the Jewish state of Judea”:

Either you accept that Jews are the Chosen People of Yahweh and have existed since Yahweh chose them and exist outside of history and society, or you have to accept that the Judeans were Judeans not Jews and that Jews, as we know them, the Rabbinic Jews, started forming only in the second century AD.