Democrats gearing up for 2018 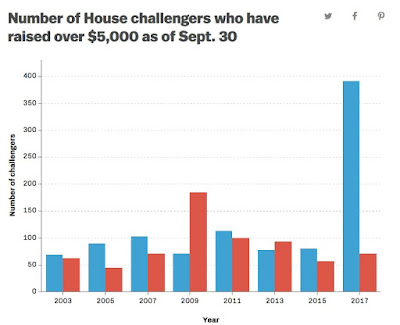 I'm not going to venture a prediction about the Alabama Senate election today; if Democrat Doug Jones somehow pulls it out, it will be a heck of a statement about the Heart of Dixie state not wanting to be embarrassed in the rest of the country.

But the chart above points to a different and better trend nationwide for November 2018. Democratic House candidates are coming out of the woodwork -- and raising significant money.

I checked in on the nearest contested seat to San Francisco, District 10 in California's Central Valley; at this time Ballotpedia lists eight aspiring Democratic candidates -- and one who has already fallen by the way side. The district voted for Hillary Clinton by a margin of 2.9% in 2016; the incumbent Republican Congressman, Jeff Denham, voted for repeal of Obamacare last spring. Confronted by constituents who pointed out the large number of MediCal (Medicaid) enrollees in the district who would be hurt, he resorted to weaseling, insisting the repeal would be bipartisan. This kind of willful deception will certainly be a feature of the contest next fall.

According to Politico's Target Book, several of the Democratic challengers are well funded, including Josh Harder and TJ Cox. Two of the aspiring Congresspeople are nurses: Dotty Nygard and Sue Zwahlen. The California primary election which will decide which of this crowd gets to run against Denham in November is June 5. Let's hope the losers will put national necessity above personal ambition and throw their weight behind whoever wins. At that point, outsiders can meaningfully throw ourselves into electing the choice of the people in the district.

Dems have lots of reasons to be hopeful as we approach the 2018 vote. Amy Walter of the nonpartisan Cook Political Report sees plenty of signs of a wave election, an outpouring of Democratic support that sweeps up many contested seats.

I am having a nagging sense of deja vu - a feeling like I've been here and heard these same arguments before. Way back in 2006, my boss Charlie Cook was warning that the year was shaping up to be a wave year. I argued that unlike the last wave election of 1994, the party holding the White House was much better prepared. Republicans in 2006 had significant financial advantages. They had structural advantages. And, Democrats couldn’t sneak up on Republicans as Republicans had to Democrats in 1994. Obviously, my theory was wrong and Charlie was right.

... Getting a tax bill across the finish line isn’t going to be enough to change the mood of the country. It is going to take something much more significant to do that. A good economy is helpful to the GOP as it can cut down on some of the headwinds coming at them right now. But, it’s not clear to me that it’s enough to fundamentally alter the way voters see Congress, the GOP and the President.

... Democrats have a narrow path to 24 seats - even with a big wave or tailwind. But, do not ignore what’s right in front of us. A wave is building. If I were a Republican running for Congress, I’d be taking that more seriously than ever.

This is a good outcome we all can help make happen.
Posted by janinsanfran at 5:00 AM

I also would like to see the Dems take the Congress but when they do, you know impeachment is first on their agenda and they will do nothing about the problems we face on immigration, jobs, health care, terrorism, taxes, environment. They will do what they've done before, if they succeed in impeaching him, which is virtually nothing even when they had a Dem president. I understand you have more faith in dems than I do. I hope you are right because i am tired of those who don't put the good of the people (not just the elites) first and make their primary work all about partisan gain and more money for them :(. Right now, except for how they talk, in terms of what they do, I don't see the current dominant parties as having a nickel's worth of difference between them in responsible governing. We vote for them and like Charlie Brown with the football, they jerk it all out from under us.