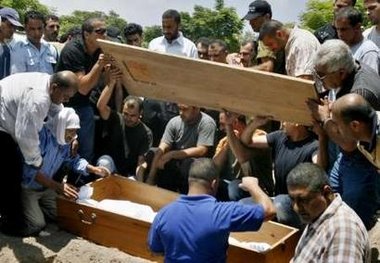 A man cries near a coffin during a burial ceremony for his wife and two daughters who died on Saturday during a rocket attack on the village of Arab El Aramshe in northern Israel near the Israeli-Lebanon border, August 6, 2006. REUTERS/Petr Josek (ISRAEL)

Something I had been wondering about: fully one third of the small number of civilians killed in Israel as a result of the war on Lebanon have been members of Arab communities. Ha'aretz suggests one reason:

There is no public bomb shelter in any of the Arab communities. Many residents stand in stairwells or cling to the walls during the air-raids.

The same Ha'aretz article gives a clear description of the distance between the information environment of these Arabs and that of Israeli Jews:

The television remotes are working overtime these days. The televisions are on in every Arab home in the Galilee. On Al Jazeera or the Lebanese stations, things look different. "The longer it continues the greater the anger. You can't ignore the images, the sounds. What do you mean, where is the anger directed? At Israel, of course," a Dir Assad resident said yesterday.

... While the Israeli channels depict a difficult but just war, the Arab satellite stations show constant attacks against civilians. The number of bodies seen on the screens every hour could change someone's opinion of the justness of this war, and Israel is viewed as the instigator.

Interestingly, in light of this difference, the attitudes of Arabs in Israel reported by Ha'aretz are reported very similarly by Al-Jazeera. The divergence is not the facts, but in the passion elicited about the same information.

"We watch Israeli TV and can see that in Jewish towns like Haifa and Nahariya they have air raid sirens to warn them and public shelters in which they can hide," said Ziad Awaisi, a 31-year-old physiotherapist.

"What do we have? Nothing. There is no place for us to hide. Israel doesn’t think our deaths are important."

Posted by janinsanfran at 12:59 PM

One thing. MOST people staing not in public shelters but in thier home shelters. So here is the questions - "why there are no shelters in arab homes"? Becuase the arabs in Israel prefer not to build them! In cities like Haifa every(!) new building has shelter (even in arab suburbs)... And in "vadi nisnas"(arab area) where 3 rocket has hit Haifa there are shelters. Morover people USED them.
But in areas where there is unlawfull building process, arabs perefer not to build shelters. and about public shelters: they should ask their local towns mayors - why the don't have public shelters...