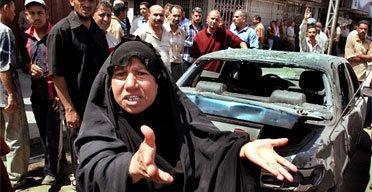 The following comes from Stratfor, the foreign-affairs-analysis-for-hire shop for the capitalist class:

The United States... is facing a situation in Iraq that has broken decisively against it. However hopeful the situation might have been the night al-Zarqawi died, the decision by Iran's allies in Iraq to pursue civil war rather than a coalition government has put the United States into a militarily untenable position. It does not have sufficient forces to prevent a civil war. It can undertake the defense of the Sunnis, but only at the cost of further polarization with the Shia. The United States' military options are severely limited, and therefore, withdrawal becomes even more difficult. The only possibility is a negotiated settlement -- and at this point, Iran doesn't need to negotiate. Unless Grand Ayatollah Ali al-Sistani, the top Shiite cleric in Iraq, firmly demands a truce, the sectarian fighting will continue -- and at the moment, it is not even clear that al-Sistani could get a truce if he wanted one.

While the United States was focused on the chimera of an Iranian nuclear bomb -- a possibility that, assuming everything we have heard is true, remains years away from becoming reality -- Iran has moved to redefine the region. At the very least, civil war in Lebanon (where Christians and Sunnis might resist Hezbollah) could match civil war in Iraq, with the Israelis and Americans trapped in undesirable roles.

The break point has come and gone. The United States now must make an enormously difficult decision. If it simply withdraws forces from Iraq, it leaves the Arabian Peninsula open to Iran and loses all psychological advantage it gained with the invasion of Iraq. If American forces stay in Iraq, it will be as a purely symbolic gesture, without any hope for imposing a solution. If this were 2004, the United States might have the stomach for a massive infusion of forces -- an attempt to force a favorable resolution. But this is 2006, and the moment for that has passed. The United States now has no good choices; its best bet was blown up by Iran. Going to war with Iran is not an option. In Lebanon, we have just seen the value of air campaigns pursued in isolation, and the United States does not have a force capable of occupying and pacifying Iran.

As sometimes happens, obvious conclusions must be drawn.

Emphasis mine. Guess the capitalists are saying "cut and run." Wonder whether Bush jumps for them or hangs tough with the Israeli lobby and the American Rapturists?
Posted by janinsanfran at 3:30 PM

"At the very least, civil war in Lebanon (where Christians and Sunnis might resist Hezbollah) could match civil war in Iraq"

the above is what the israelis and the bush administration counted on. but it did Not happen and it is not going to happen.
the first days, saudi arabia and their followers took a stand against hezballah. no one thought the israelis would go about bombing every area in lebanon and no one thought that they would go so cruelly against the lebanese shia.
so what happened next is that the sunni leadership as well as the sunni of the street remembered their arab-nationalism and their lebanese nationalism and the rift was avoided.
yes there will be lots of political arguing when all will calm down, and all talk about it. all of us talk about it. but the cruelty of the israelis and of the american administration created a national solidarity. not unity, solidarity.
i say israelis, and not israeli government, because all reporting from overthere, there is a national unity behind what is being done to lebanon.
except for the very few who either demonstrated or the ones whom we read in haaretz, i find myself unable to imagine a peaceful future with the israelis. it has become self-evident that there is a need of looking in the eye, the legitimacy of israel, of a state that was created on racist premises and on a colonialist praxis.
after this destruction of lebanon, there will be no excuse for any supporter of israel outside israel to keep supporting that state. not in my eyes anyhow. not in the eyes of arabs. and not in the eyes of muslims. people in the usa have to take a stand. and will have to take a stand. no one can hide and say i didn't know. it has happened too many times already. 7 times against my country. always with american public opinion support.