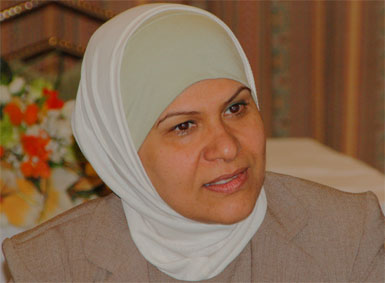 Faiza Al-Arji sees U.S. rulers as others see them:

Did you ever meet a kind of person to whom you tell a story, or complain about some sort of problem, then look at him, only to find him absent minded in another world, then, he would turn to you to give you remarks and deductions which have nothing to dowhatsoever with what you were talking about?

This is how it is to talk with most of the American administration's members, and most of the American Congress members. They are people who live only in their closed, limited world, who have no wish, or mental ability, to listen to the Other. They listen to the illusory, inner voice in their heads, insisting upon it, for years and years, until they are removed from their posts. ...

Bush yesterday said, as usual, the sentence that all the losers in the American administration like to say: "I have told the Iraqi Prime Minister we will not abandon you, and will not pull the troops out of Iraq." ...

I heard that sentence for the first time from an American congressman, while we were standing in one of the corridors of the congress building some months ago, with an Iraqi women delegation, when the man passed. ... He puffed up his feathers and said the same phrase: Don't worry, we will not abandon you, and will not pull the troops out of Iraq….

I looked at that foolish man, and saw how stupid and conceited he is, how he reads reality according to his mood, imagining he is playing the role of the savior hero, while we play the role of the weaklings who call to him for help. The truth is exactly the opposite; the American presence in Iraq brought upon us destruction, catastrophes, chaos and terrorism.

UPDATE: just got this email from another Iraqi woman, currently in Baghdad. I am not naming her because I fear for her safety.

The situation now is bad. The US and Iraqi Army close the street in AlDoura west of Baghdad and Alatifia and AlSader city east of Baghdad. ...In AlSader city many citizens killed and wounded because Marines attacked them by Helkopters and tanks. Kidnapping is normal here; the theives kidnapped my cousin and many friends here...

I was hostage in AlDoura when I went to see my sisters -- the Marines and Iraqi army close all the streets and don't allow anyone to enter or out of Aldoura. And there are war in AlSader city and the marines shooted it east of Baghdad and they close all the streets to AlSader city and AlDoura west of Baghdad and many citezens killed and wounded and till now the streets close the situation is very very bad here. I hardly get out of AlDoura...! God helps and I want to complete all my dificulties here and leave as soon as I can but I hope it become more safe to get out.

Meanwhile, Riverbend shares her stories of Baghdad in this terrible summer, A Summer of Goodbyes:

I've said goodbye this last month to more people than I can count. Some of the 'goodbyes' were hurried and furtive -- the sort you say at night to the neighbor who got a death threat and is leaving at the break of dawn, quietly.

Some of the 'goodbyes' were emotional and long-drawn, to the relatives and friends who can no longer bear to live in a country coming apart at the seams.

Many of the 'goodbyes' were said stoically -- almost casually -- with a fake smile plastered on the face and the words, "See you soon" ... Only to walk out the door and want to collapse with the burden of parting with yet another loved one.

Posted by janinsanfran at 6:35 AM

It is OK for this. USA brings back Jesus Christ very soon. You see. Must just hold on a little while longer then war is done because Jesus take away all soldiers during Rapture. Truly. Soon. Pray.