Brazilians on the Vineyard 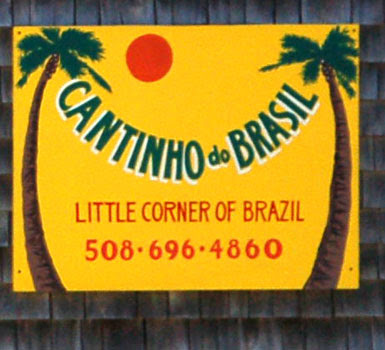 Even in a resort playground, somebody has to do the work. In the modern United States, hard, undignified and dirty work is usually done by immigrants, often undocumented. Here in Martha's Vineyard, for the last ten years, many of the immigrants doing the scut work have come from Brazil.

This island, which hosts 75,000 people in mid-summer, shrinks to some 15,000 residents in the winter. It is estimated that 2-3000 of these are Brazilians, the island's low wage work force. The life they come to is hard:

Joao, a middle-aged Brazilian painter, says that he deals with life one day at a time. “Every day I break a new barrier” he says, “finishing a day’s work is a new victory.”

...[Joao's friend] Pereira, 18, is optimistic about his life on Martha’s Vineyard. After only four months of work, he is hoping that in eight months he will have already earned enough money to repay the $10,000 his aunt lent him in Brazil to pay the human trafficking agency that arranged his journey to Martha’s Vineyard. Unlike some Brazilians, he does not have a deadline to pay the sum; nor does he have to pay interest on it. He estimates the cost of living for himself and most Brazilians on the Island to be $800-900 monthly, roughly $30 daily, which includes rent, telephone bills, food, and in his case the cost of being an indentured servant to his aunt for the next year.

... In Brazil, both Joao and Pereira were led to believe that they could easily make upwards of $25 per hour in the United States. Both currently earn $13 an hour and say that only English speaking Brazilians who have professional skills can make $18-25 an hour....

They say that a friend who only makes $9/hr must work 16-hour days so he can pay off the money that he borrowed to come here and simultaneously support his family in Brazil.
Martha's Vineyard Times, August 18, 2005

Neither of these men plans to stay in the United States permanently, though New England has historically become home to many previous Portuguese-speaking immigrants, mostly from the Azores.

Naturally the new community has the usual detractors. Here's an excerpt from a letter to the editor from a Vineyarder who clearly thinks her space has been invaded:

Has anyone else taken notice of the court news? There seems to be a recurring trend. Last week at least half of the people listed were Brazilians or other foreigners, all going to court for no license or a fake license, no inspection, no insurance, etc.

On the other hand, island public libraries and educators are making serious efforts to serve this newcomer population. And island musicians are enjoying cross cultural fertilization.

Given the tension over their presence, their demanding lives and the cost of doing business on this island, it is not surprising that Vineyard Brazilians have not created a highly visible cultural enclave. There are Brazilian-oriented businesses, but you won't find a lot of people in any of them in the middle of the day -- folks are working. Here's a tour of a few I found. 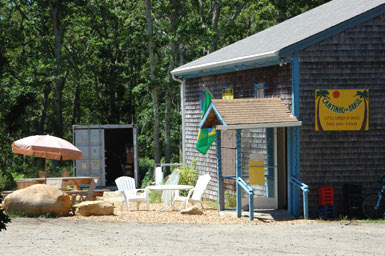 The cantina was empty at mid-day. 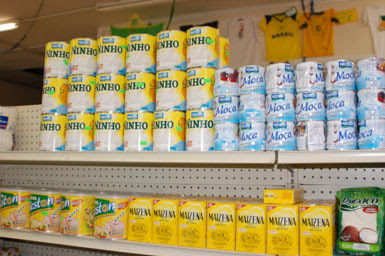 Inside shelves displayed a limited variety of Brazilian products. 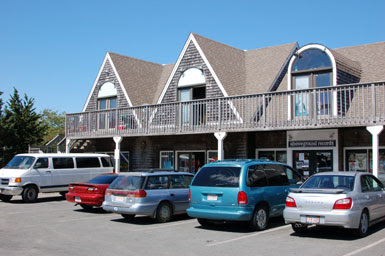 At the commercial strip mall outside Edgartown, you wouldn't know that a store carrying Brazilian imports occupied the corner space. 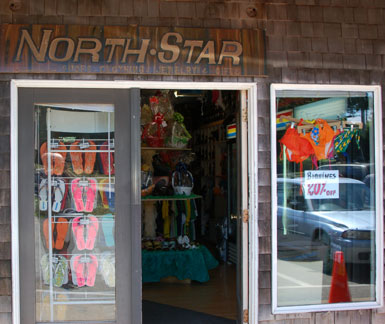 In fact, you might not even know from looking at the doorway. 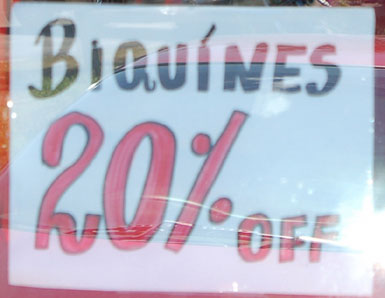 Though a close look at the window sign might be a tip off. This one also was empty of customers at midday. 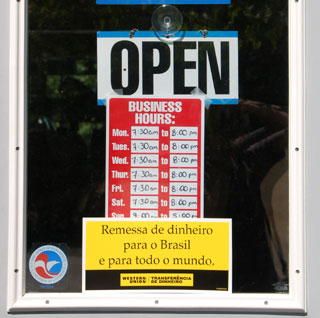 Around a corner, I noticed this door to a remittance office from which earnings flow to Brazil. It is probably more important to many Vineyard Brazilians than any business asking them to spend their money. 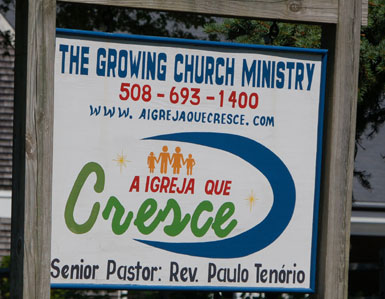 By far the most visible Brazilian institution I found was this evangelical Protestant church in Vineyard Haven. 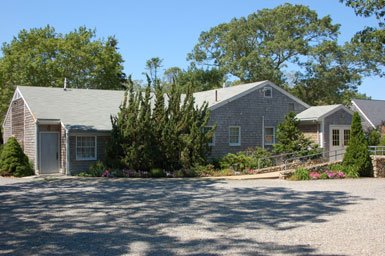 Looks like Brazilian Christians are here to stay.
Posted by janinsanfran at 9:58 AM