Baghdad: the graveyard of hell 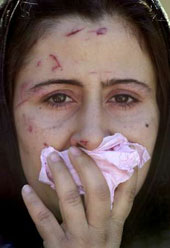 We met Amal in Amman, Jordan in June. She sent this letter to one of the members of our peace delegation. I have minimally corrected her English spelling and grammar.

I have been in Baghdad for three weeks, it looks not three weeks but it looks like years. The situation is so bad. Not safe at all.

Baghdad looks like graveyard of hell. The US military close all the streets -- no cars pass through. No one can go from city to city in Baghdad. No people go to work for 4 or 5 days. The tanks everywhere and the police cars in front of every street and the fear in all eyes from the USA military and the police. Also from the killers and the thieves.

The weather is too hot: my skin burns and hurts me so much because of the sun and the heat. The killing everywhere; it's the real hell.

Before 5 days three women [were] kidnapped in front of the people and no one helped them in Al Karada, I heard. The people talked about the kidnappers, how they took the girl to the car holding guns, and how they were sorry that they couldn't help. Also there were police cars near the accident but they are also scared to help. What kind of freedom or democracy that Bush gave to Iraq or the midle east?

Baghdad is like hell in the day and the dark in the night, no electric, no good water. Every thing is expensive more than you imagine. (It is like Death Valley in US, maybe worse.)

I don't know how the people can stand [by]. [T]he government [with] supporting the Congress of USA [is] killing the Iraqis, slowly way. Many children killed by the weather and the poverty, and no Ciyrosin (oil) for cars. The taxi took more the 10 Dollars to pick one to 10 miles. It is horrible situation here.

The photo accompanying this post is an unidentified Iraqi woman, taken by Ali Jasim for Reuters in 2003.

Posted by janinsanfran at 5:22 AM

Oh my! I really respect and admire your courage in making this trip! The pictures are heart-breaking & I keep you & all the Middle East in my prayers. There has to be a solution somewhere. And we as citizens have to look for it and urge our leaders to find the right answers. This suffering must end.