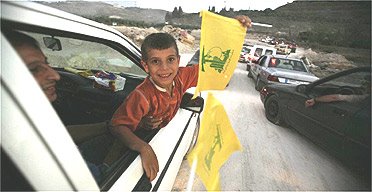 For displaced Lebanese returning to their homes, there is joy -- and rubble.

The ceasefire in Lebanon has created space for a deluge of thoughtful articles dealing with aspects of the conflict. This post is a potpourri of links highlighting the more interesting snippets.

The Battle of Lebanon was a rude little war that played like a blockbuster summer film. This, perhaps, was the fundamental mistake that Israel and its US backers made: they underestimated the articulateness of Lebanon -- a multilingual country, connected to a global diaspora, with a history so compelling that novice and seasoned journalists are drawn to its stories by instinct....

As the vastly more powerful force, the IDF could have crushed Hezbollah, but only by conducting a genocide on the Shiite people of southern Lebanon who support its resistance. And genocide, on global TV, is the one sin Israel cannot survive. Hezbollah is a designer resistance force, shaped by repeated Israeli blows against Arabs -- designed not simply to counter its powerful adversary's field techniques, but to infiltrate its soul and seek its deepest pain. It finds this pain like a heat-seeking missile finds its warm target because Hezbollah's resistance, too, is born of pain.

Hizbullah happens to be the Lebanese organization that has taken this degree of professionalism to the highest degree of impact on the public - good or bad impact, depending on your perspective. Politically, Hizbullah will be challenged, engaged, opposed and long debated. Organizationally and logistically, it has historic lessons to teach all other Arabs in the country and the region. Those Arabs, including the Lebanese, should be alert enough to recognize the rare capacity for efficacy that Hizbullah has developed, and apply it in those crucial fields of public life and national development that have suffered so much mediocrity in the recent past.

Love it or hate it, Hizbullah has lessons for all Arabs
Editorial
Daily Star, Beirut, Lebanon
August 17, 2006

I am trying to recall when I last saw Israeli leaders talking with Arab leaders about peace, and finding it hard to remember. In recent years, our compulsive tendency to talk to ourselves about an agreement with the Arabs has been strengthening, as though the real conflict in the Middle East were between the right and the left. The fruitless discussions between these two tired bodies have had two goals: to neutralize any possibility of change and to freeze the reality on the ground, for fear that any step toward peace will ignite a domestic war among the Jews. And if we are already fated to go to war, say our architects to themselves, it is better to have a war against the Arabs. It is torturous to think that had similar diplomatic energy been invested vis-a-vis Palestinian leaders, Lebanese leaders and Syrian leaders, perhaps everything would look different. Perhaps we would even be living in peace with them.

There is no need for a left that is neither here nor there. For that Shimon Peres and Ophir Pines-Paz are quite enough.... We can do without such a useless left.

The left should have understood in time that joining the consensus, even sourly and reluctantly, would only speed the march of Olmert, Peretz and Dan Halutz into the depths of Lebanon.

If in these times of trial the left did not rise from its knees and take a stand, when exactly did it intend to rise? There is nothing more repulsive than judging a war by its outcome.

With such a left, who needs a right?
Yossi Sarid
Haaretz newspaper, Israel
August 15, 2006

Isn't the failure of the peace camp a result of its inability to speak about the cheapness of Arab blood?

You are terrorists, we are virtuous
Yitzhak Laor, Tel Aviv
London Review of Books
August 3, 2006

The common Israeli view - one that Bush and Blair have swallowed in its entirety - sees the Arabs and Iran as pits of Islamic terror and anti-Semitic savagery that want only to kill Jews and annihilate Israel. They are free to live in this imaginary world if they wish to, but the consequences are grim, as we see today. Subjugated and savaged Arabs will fight back, generation after generation, just as the Jews did historically, inspired as they were by the moral force of the 'Deuteronomistic' way. If the world does not offer you justice, you fight for your rights....

Moses had it right, perhaps because he accumulated much wisdom during his 120 years of life. Meet the legitimate demands of both parties to a dispute, he said, and a fair, lasting resolution will emerge. Ignore the centrality of justice and equal rights for both parties, and you will be smitten by divine fire - or fated to fight your adversaries forever, as Israel seems to have opted to do.

Unless Israel, with or without the Playstation revolutionaries in the White House, is able to make the compromises necessary to reach the political agreements with the Arab world that have [been] set out as the minimum basis for peace -- a return to its 1967 borders -- then Israel's long-term prospects are no greater than the short-term prospects of the U.S. in Iraq.

What is the logic that will emerge from this war? If Israel can exist only by destroying the neighborhood, then it's time to declare it a failed state. The Zionist dream has turned into a nightmare and is not viable. If the future holds more of the same, then the time has come to reconsider the whole project. Every state has a duty to defend its citizens, but also it has a duty to provide them with security and the two are different. The prospects are for more destruction, fanaticism, violence and hatred. No unilateral separation can isolate Israel from this, nor can the region or the world live with the consequences. This seems to be the only choice, and Israel must do itself and others a favor and go away.

For the moment the guns are quiet. People will rebuild. Lasting peace will require some measure of justice and a large dose of compassion. It is not at all clear that the ingredients of peace are present.
Posted by janinsanfran at 7:18 PM

reading these quotes is important to my understanding of what is going on. u.s. media is quite unsatisfactory. thanks so much.