By land or by sea 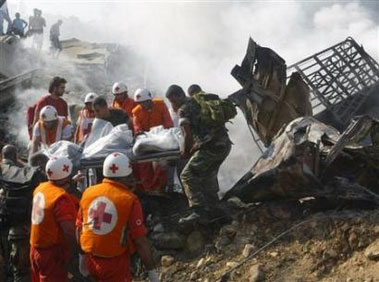 Lebanese rescuers evacuate the charred remains of a victim after the destruction of Halat bridge by Israeli war planes, north of Beirut, August 4, 2006. (Mohamed Azakir/Reuters)

Guess the Israelis don't want any more relief supplies getting through to the one quarter of the Lebanese population now forced out of their homes by Israeli bombs.

At sea, apparently, availability of relief supplies to Lebanon comes down to insurance coverage. Or lack of same.

Israel has agreed to let two tankers pass through its naval blockade but their owners have refused to proceed without an actual written guarantee of safety for war insurance purposes.

Probably those of us concerned should contribute to Doctors without Borders. Thirty staff in Lebanon are working to support Lebanese health workers.
Posted by janinsanfran at 10:06 AM