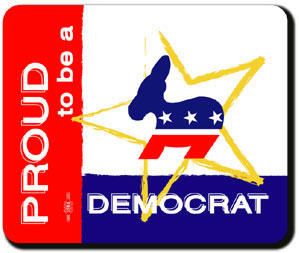 Not sure about this mousepad.

Two guys whose commentary on the world I really trust are having a disagreement.

...here's my confession: At this point I really don't give a flying fuck whether the Democrats take the House or the Senate back. No, wait, that's not true. The truth is I hope they don't. It wouldn't save us from what's coming down the road, in the Middle East and elsewhere. It wouldn't force President Psychopath to change course or seek therapy. But it would make sure that the "left" (ha ha ha) gets more than its fair share of blame for the approaching debacle.

That may well be the natural role of the Democratic Party in our one-and-a-half party system, but I don't want any part of it any more.

A lot of nice, middle class progressives forget that the fight isn't for them.

Billmon returned to his theme:

Watching the Dems line up to salute the Israeli war machine, hearing the uncomfortable and awkward silence descend on most of Left Blogistan once the bombs started falling in Lebanon, seeing how easily the same Orwellian propaganda tricks worked their magic on the pseudoliberals -- all this doesn't leave too much room for doubt. As long as World War III can be sold as protecting the security and survival of the Jewish state, I suspect the overwhelming majority of Democrats, or at least the overwhelming majority of Democratic politicians, will support it.

It is a selfish thing to sit back, say all is lost and go to work in a nice office building. Because what you're saying is that people are going to die, and oh, well, not much we can do for them.

The Iranians can end our Iraqi adventure with a few phone calls. But those tiny differences, the one you don't think can really matter are life and death issues. And I've seen it close up. You want US policy to change towards Israel, we need election finance reform. Throwing up your hands about it solves nothing.

Posted by janinsanfran at 10:54 AM

I couldn't agree more that the core communities you list "people of color, the working class and poor, and women heads of households" are the base of any hope to move justice politics forward in this country. It's one of the reasons I have such little hope in the Democratic Party as a vehicle to move us forward -- its funding base is significantly composed of the same social forces (capital) that power the foundations of which you are so thoughtfully critical.

It's interesting to me that you mention Audie Bock since it seems I read that experience differently than you do. Here's my read: an inexperienced local Green Party was excited to find a candidate (Audie Bock) to run in a race with worries of a spoiler effect (if I remember correctly there was no Republican running). Internal squables among the Dems opened up a space for Audie and the Green Party to win.

Audie got into Sacramento. For a while she tried to be somewhat exemplary: she called up local unions and asked what they wanted her to do instead of waiting for them to call her, etc. All this while the Dems in Sacramento were behaving in alternately sectarian/isolating and seductive/friendly ways.

Then (sigh) she got bought. She took money from Chevron after some Democratic Party hack told her it was the only way to get re-elected. And we (by this I don't mean just Greens) didn't have the capability of providing the emotional and political support necessary to keep anyone with less moral stature than a Wilson Riles or Cynthia McKinney on track.

I heard about this and thought: there goes the Green Party. They (we, but I wasn't so active at the time) will bend on principle cuz its sooo seductive to have SOMEONE, ANYONE in Sacramento (and there you have the siren song of Demo politics in a nutshell). But they didn't. They told her that the Green Party doesn't take corporate money and in fact thinks the influence of corporations like Chevron are a good part of what's rotten in politics whether in Sacramento or in, for example, the Richmond City Council.

She said, basically, grow up and play with the big boys. We said, take a hike. She lost the only active base she ever had (opportunism doesn't always equal tactical savvy, I guess) and the local Green Party stayed true to its principles and learned something about what that might mean/cost.

That and a lot of good local work supporting various social justice grassroots campaigns (and higher profile efforts like those of Camejo) put us in a place where women like Aimee Allison https://www.aimeeallison.org/?q=blog , Jane Kim http://www.janekim.org/ and Gayle McLaughlin http://www.gaylemclaughlin.net/Gayle4mayor_leaflet.htm
are now the Green Party's East Bay standard bearers. A huge step forward and still needing more help from folks with the skills, relationships, compassion and smarts that you, Jan, bring to everything with which you engage.

I certainly don't hope with Billmon that the Republicans win but I think the left loses when we pour our energy into Democratic Party campaigns. There was an anti-war movement before the Presidential election cycle and then... well, we couldn't embarrass Kerry who criticized Bush for not having ENOUGH troops in Iraq and being too SOFT on Chavez in Venezuela but thought his plans for Israel/Palestine were just peachy.

I do think Kerry would have given us more space domestically on a number of key fights but I think its reasonable to argue that he would have been as bad or worse than Bush for our struggle to limit empire. And worse of all the "price of the ticket" was to demobilize our incipient movement, to tell people their only meaningful political activity was to vote for someone whom they disagreed with on most of their core values.

And I think white working class folks in the heartland understood the strategy basically correctly: "latte liberals and their radical left fringe are choosing a candidate that they disagree with because they think I'm stupid enough to vote for him and then he'll turn out to be more like them than he says he is (they hope Kerry's lieing and that I'm stupid!). Well I don't know what I think about Bush but I'm going to vote for him just to stick it to those fools who are calling me stupid."

And that's what I kept hearing from far too many of my radical friends who stumped (and taught others to stump) for Kerry: how could the American people be sooo stupid.

I'm not sure exactly how we move forward but I don't believe -- nor do I imagine that you do -- that organizing around a core belief in the stupidity of working class folk is a step in the right direction.

Peace among those who struggle,