Anglican Bishop of Jerusalem on the "situation" 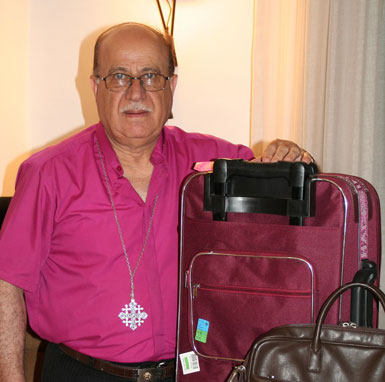 The Rt. Rev. Riah H. Abu El-Assal is Episcopal Bishop of the Diocese of Jerusalem, which includes Palestine, Israel, Jordan, Lebanon, and Syria. These Christians are a tiny fraction of the people of these countries, but deep rooted and enduring. What follows are excerpts from the Bishop's letters over the last month.

July 26
For the past forty years we have been largely alone on this desert fighting a predator that not only has robbed us of all but a small piece of our historic homeland.... We are tired, weary, sick, and wounded. We need your help....

Little more than a week ago, we were focused on the plight of the Palestinian people. In Gaza, four and five generations have been victims of Israeli racism, hate crimes, terror, violence, and murder. Garbage and sewage have created a likely outbreak of cholera as Israeli strategies create the collapse of infrastructures. There is no milk. Drinking water, food, and medicine are in serious short supply. Innocents are being killed and dying from lack of available emergency care. Children are paying the ultimate price....

This week, war broke out on the Lebanon-Israeli border (near Banyas where Jesus gave St. Peter the keys to heaven and earth). The Israeli government’s disproportionate reaction to provocation was consistent with their opportunistic responses in which they destroy their perceived enemy.... The “situation” as it has come to be called, has deteriorated into a war without boundaries or limitations. It is a war with deadly potential beyond the imaginations of most civilized people....

August 2
When I wrote to you last Friday, I could not have imagined that a second Qana Massacre in a decade would be carried out by the State of Israel, crushing at least [twenty-eight] people.... They suffocated under dirt and debris, virtually buried alive in the make-shift bomb shelter where they had had little water and food and no toilet....

And [in Gaza,] ...according to an Associated Press count, in the past one month period, Israeli troops have killed 159 Palestinians since they started their relentless attacks on the Gaza Strip in response to the capture of soldier Cpl. Gilad Shalit. I have seen the Caterpillar bulldozers and the orchards of oranges uprooted by them. I saw an apartment building where forty families were given forty minutes to leave before it was demolished into a pile of rubble.... And, I have seen children playing near mountains of garbage which are the breeding ground to rats and the threat of cholera, a disease that I watched devastate India when I lived there.

August 7, 2006
I was scheduled to leave Tel Aviv on Swiss Air flight number 255D at 15:55 this afternoon. ... After asking me both relevant and non-relevant security questions, the young woman security officer concluded by questioning why I did not have an Israeli visa even though I was carrying an Israeli passport!!

...I saw her rushing to a supervisor.... Approaching me he asked, “English or Hebrew?” I responded, “Please, Arabic”. Arabic is one of two official languages of the State of Israel and I knew that it was my right in this “oasis of democracy” to make that official request.

Because I refused to speak other than Arabic, because I informed them that I am an Arab-Palestinian-Christian, and because down deep I knew that their behavior was designed to humiliate me, I insisted in conversing with them in the language I master which is Arabic, my mother tongue.... Mr. Vardi turned his back and turned toward me only to say, “You will not fly today!”

My indignation is not for me, but it is for all people in occupied territories who face this kind of oppression and humiliation every day of their lives. This happened to an Anglican Bishop with special identification.... What do you imagine happens to others?
***
What indeed?
Posted by janinsanfran at 7:22 PM