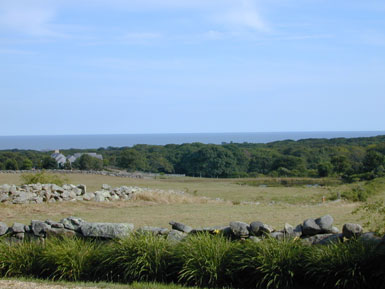 It is hard to overstate how peaceful the place is where I'm staying these days. Perhaps a few items from the police blotter column of the island's "Newspaper of Record for 160 Years," the Vineyard Gazette will convey the flavor of the place.

Oak Bluffs
There were no problems with crowd control, noise complaints or intoxicated bar patrons along Circuit avenue over the weekend and no arrests were made...Police issued a citation to a man caught urinating in the street and helped remove a number of people who crawled up on a roof of the Sand Bar and Grill, but overall it was a very peaceful weekend.

Tisbury
Police responded to a call of a large bonfire off Beach street extension just after 11 p.m. on Saturday. The six people at the scene were told they would have to extinguish the blaze....

Chilmark
Police were called to break up a verbal dispute over a parking spot after 4 p.m. Saturday at Lucy Vincent beach. There were no arrests or charges filed in connection with the dispute.

While so much of the world suffers, it remains good to know that there are a few such peaceful spots. If only visiting them didn't require access to wealth and privilege unimaginable to most of humanity...
Posted by janinsanfran at 4:44 PM