About this, I'd rather be serious than sorry 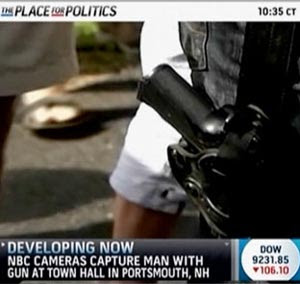 The pictures and stories of guys flaunting their guns outside of a couple of Presidential appearances recently reminded me all too vividly of my youth in activism. Part of my summer reading has been Rick Perlstein's monumental Nixonland: The Rise of a President and the Fracturing of America. I'm sure I'll write more about this volume in the future -- it's by far the richest account of the U.S. in the 1960s I've ever encountered.

Perlstein vividly recounts the violence the right adopted when young people who would be drafted to fight began to question the Vietnam war.

History would remember the antiwar side's turn to violence years later, but neglected the pro-war side's, which was immediate. The first antiwar teach-in, at the University of Michigan, was interrupted by a bomb threat. ... In Berkeley in October 1965, fifteen thousand militants marched from campus to "pacify" the Oakland Army Terminal. They were turned back by cordons of riot-helmeted police, but not before Hells Angels were allowed across police lines to crack some hippie heads. ...The barn of a pacifist communal farm in Voluntown, Connecticut, burned down (police said nothing led them to believe the fire had been set, though the farm was constantly harassed by vigilantes after a local petition campaign failed to run the pacifists out of town.) ...

As in violently segregationist neighborhoods (in the South, but also in the North), it wasn't the left that turned to violence in the 1960s, until much later. (Full disclosure: I was in that march in Oakland and knew the Voluntown folks. These were not, then or ever, violent people.)

This bringing your piece to the party practice is about intimidation. It's got nothing to do with free speech or democracy -- it is a naked effort to impose, by threat of force, a minority point of view that was rejected at the last election. E.J. Dionne hammered home this truth in a recent column.

There is a philosophical issue here that gets buried under the fear that so many politicians and media-types have of seeming to be out of touch with the so-called American heartland.

The simple fact is that an armed citizenry is not the basis for our freedoms. Our freedoms rest on a moral consensus, enshrined in law, that in a democratic republic we work out our differences through reasoned, and sometimes raucous, argument. Free elections and open debate are not rooted in violence or the threat of violence. They are precisely the alternative to violence, and guns have no place in them.

On the contrary, violence and the threat of violence have always been used by those who wanted to bypass democratic procedures and the rule of law.

If there is no Constitutional way to outlaw people carrying assault weapons to threaten other citizens with whom they disagree, this country is pretty far gone. Under the last administration we got to see a lawless government; under this one, we're getting to see a lawless minority faction of disappointed bullies trying to bust up the country out of spite. Can we find a way to stop them that doesn't itself escalate into violence? We better...

Posted by janinsanfran at 5:23 PM