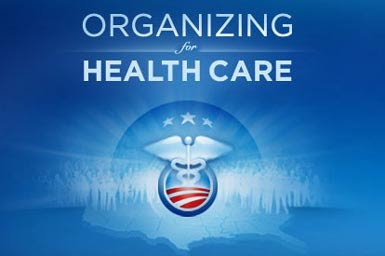 The emails (and fund appeals) are flowing in. Those of us who've kept up a connection with the current iteration of the Obama campaign machine are being called to action in support of our President's healthcare reform. I think it is going to be a tough sell for the organizers. Some of the obstacles: Ultimately, Obama's activists are CHANGE people. The campaign knew that and sold it. Now OFA is trying to mobilize the same group for modest, reasonable, incremental benefits. This is a tough sell; I'm not surprised that the other side is being more visibly successful in turning out anxious, fearful Obama opponents.

And yes -- I'll put in some time agitating for Obama-care, unless I think it has warped into something actively hurtful to access for most people. But this campaign is not a happy one; it is pure defense. If the right kills whatever half-assed healthcare "reform" we end up with, it will cripple many of the possibilities opened up by Obama's election and the hard won Democratic majorities in Congress.

But saying that is a far cry from the joy of last November. The prospect ahead is a long slog up a tough hill toward what may be a false summit, not a glad community dance.

Posted by janinsanfran at 10:51 AM

Sigh! All too true. I am trying hard to be optimistic, but it gets harder each day.

If we don't get the minimum of a Public Option this time around real reform is doomed in this country for decades.

Shattered dreams are hard to swallow.

Well put Jan. I can't muster enthusiasm, even though I agree that losing the battle would be a big setback. You enumerate the specific political problems of this policy battle very clearly, and it makes me fear that Kevin Baker's article "Barack Hoover Obama: The best and the brightest blow it again" (Harper's) may be on target.