Healthcare reform short:
a democracy -- or not?

Blogging here will be a little different over the next week, I hope. You see, I'm really on vacation in one of the most beautiful places in the world. And if I have any energy for the blog, I want to put that energy into some behind the scenes work to make this place function a little more cleanly.

But on the other hand, a titanic struggle of over healthcare reform seems to be playing out this August around the country. And that struggle raises all sorts of issues this blog deals in -- issues of campaigns, how public opinion gets formed and gels, ultimately, of how much of a democracy we have in this country and can we have more of one?

I could try to write some thoughtful tome on this stuff. There are oceans of material, scads of interesting angles. But I've got other stuff to do. So I'm going to throw out occasionally short posts about the healthcare reform brouhaha, not asking myself to think particularly deep thoughts, but just hoping to share some light into corners that catch my eye.

And you may get some pictures and thoughts from vacationland too. 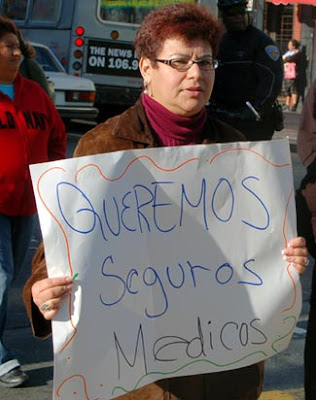 This woman, seen at a community march in the San Francisco Mission district, knew what she wanted.

Here's an oddment: one of the best summaries of the impetus behind healthcare reform from the ordinary person's point of view that I've heard was from a Heritage Foundation economist, not usually where I'd go for an overview that I can agree with.

I think there are some basic problems that we've got to solve. One is, of course, that there are millions of Americans who literally don't have adequate access to the health-care system because they don't have insurance coverage.

Even those with insurance in the United States are often very nervous that they are going to lose that insurance if they change their jobs, maybe if their child graduates college and doesn't have a job, then they can't be a dependent, so they're not under the family plan. So even people with insurance are nervous.

And I'd say thirdly that the cost of coverage, the cost of medical care in this country is enormous, compared with what we spend on other things and what other countries do, and yet we don't seem to get the value for money.

So I think it's value for money, I think it's uncertainty for people who've got coverage, and gaps in coverage. Those are the three big things that we've got to solve.

Yes -- we, most all ordinary folks in the United States, need access to healthcare and we fear not having it when we need it. The current "insurance" system creates all sorts of lunacy. If you get insurance from your job, you are stuck in your job for fear of losing your doctor. If you get healthcare through a spouse's insurance, you are stuck with your spouse for fear of losing your doctor. If you think you were injured by a doctor (or any individual or business with "deep pockets"), you almost have to sue because getting taken care of is going leave you with the dread "pre-existing condition" that makes you uninsurable and leads to bankruptcy. Then all the rich individuals and businesses have to insure against your likelihood of suing them which raises their costs and makes them every more eager to avoid insuring you ...

What we have is quite simply, NUTS. But you don't hear that from President Obama and our democratic leaders -- we hear "unsustainable" and "smart investment." Healthcare reform might be doing better if they'd honestly name the lunacy.

But that would put in play the question of whether we have enough democracy to enable our leaders to sell change to a workable majority of the people by telling the truth. Unfortunately, that is an open question.

Posted by janinsanfran at 7:53 AM

You are so right. Truth is never spoken from the lofty places because it might irritate a corporation with deep pockets. Generalities are all we get and we want specifics.

We're looking at "the urgency of some day, maybe" that has been the defining characteristic of President Obama (distinguishing him from candidate Obama... though he was pretty vague then.)

One does get the feeling that we've brought a knife (or, more accurately, a knife and a fork) to a gun fight, and our esteemed, well paid brownshirted "opponents" assumed, well, a gun fight.

Still, sunlight seems a good disinfectant: the enthusiastic thugs should be hailed to the front of all town-halls they intend to disrupt, forced to publicly identify themselves (if they lie, the youtube videos and pictures won't), and explain themselves publicly, i.e., ask whatever questions they have about "socialism," etc., and, if under such circumstances they still don't behave themselves, they can be escorted out, preferably in handcuffs.

Fear is the thugs main weapon; running scared is a bad plan; best call them on it, everywhere... they want to be thugs, fine, but then, there will be no hiding.

As to actual health care reform, it seems that ignorance is the status quo's best friend, and this being America, there's no shortage of it. No predictions, but we do seem better positioned to get something on healthcare reform than we did in 1993/4, if for no other reason, because the players are different, and because the last 15 years may have caused a tipping point toward meaningful reform.

Then again, ignorance is the status quo's best friend, and this being America, there's no shortage of it.