Lest we forget that people die ... 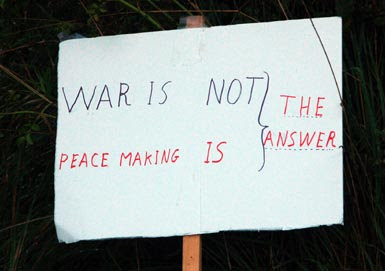 This sign marked the path to the Gay Head Light on Martha's Vineyard island, where, every year on August 6, people concerned about peace and nuclear weapons greet the dawn in memory of the Hiroshima bombing.

The determined band of peaceniks who attended might be heartened by the findings of the Chicago Council on Global Affairs 2008 opinion survey on our attitudes about foreign policy. Seventy-three percent of us think preventing the spread of nuclear weapons is very important. It's not clear from the report, whether respondents understand, as Cora Weiss, President of the Hague Appeal for Peace, said during the August 6 gathering: "If we won't get rid of them, others are going to want them and get them."

But it is clear in the same survey that, by and large, people in the United States are not gung-ho about aggressive military action all over the world.

President Obama is going to run into this reluctance as the war in Afghanistan heats up. Already, CNN reports that 54 percent of us oppose this effort, a gain of 9 points more opposition than showed up in May. That's after about 30 days of an offensive and 50 or so dead Americans. This is not a war that people think is necessary or are willing to give patient support to. George W. Bush used up and wore out whatever trust many had that Uncle Sam knows why our guys should die in faraway places.

The good folks from Peace Action West have been talking with Congresscritters about the Afghan war. Our representatives aren't exactly aggressive about protecting our interests. Rather, they floating along in a skeptical holding pattern:

While few members of Congress were eager to mount a strong opposition to the current approach in Afghanistan (especially against a president of their own party), I did not hear anyone strongly defend the strategy either.

There's room for constituent pressure to push more of them over into active opposition by the end of the year.

That seems the least we could do for Afghans and U.S. soldiers who are dying for no discernible purpose.

Posted by janinsanfran at 1:00 PM