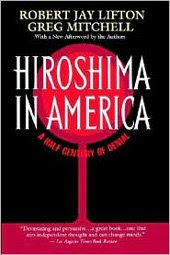 Sixty four years ago the Untied States dropped a (small) nuclear bomb on Hiroshima and killed some 70,000 people instantly and perhaps 140,000 more over the next few years. We can still hope to draw lessons from that catastrophic event. And we need to.

Fourteen years ago, Robert Jay Lifton and Greg Mitchell tried to capture some meanings of the nuclear bombings (we also blasted Nagasaki and another 200,000 souls two days later) in Hiroshima in America: Fifty Years of Denial. The book doesn't seem to have made much of a splash; you can get a copy today on Amazon for less than a buck. But some of it speaks loudly to the present moment.

No one is more overburdened than a modern American president. As historians have pointed out, he must be both chief executive and king. ...

Harry S. Truman was a good man, a loving man, who made a decision to use the cruelest weapon in human history on a heavily populated city and then spent much of his remaining years defending that decision. ... Truman, we believe, experienced an atrocity-producing situation, a psychological and political environment structured so as to motivate the average person to engage in slaughter, in this case an unprecedented dimension of slaughter. ...

Our view is that, yes, Roosevelt could possibly have taken a different turn -- which means it was at least possible for Truman to do the same. One must add, however, that such an act on the part of either would have required an extraordinary combination of courage, moral vision, and capacity to step back from immediate pressures (on behalf of a commitment to humankind) -- a combination sufficiently rare that it should discourage all of us from creating situations in which it is required of any president.

That last point is to some extent the crux of it for people in the United States. We live in enough of a democracy so we have substantial responsibility for our politicians. We can't expect to ensure we always have moral geniuses at the helm of our political system. (We've demonstrated all too recently that we may not be able to assume even a normal level of brains in these guys.)

And so, to the greatest extent possible, it becomes the duty of citizens of a country that possesses the capacity to blow the planet away to encourage policies that value moderation and equanimity. We must strive not to put our leaders in situations that might lead them to commit atrocities.

And from that perspective, Lifton and Mitchell highlight an aspect of what was going on in 1945 that has far too nasty echoes in recent U.S. experience. They make no bones about observing that, in part, U.S. leaders felt justified in frying Japanese cities to get revenge against a racially inferior enemy.

[There were] elements of racism (strong on both sides) and revenge. Images of Pearl Harbor were still vivid ...

Interestingly, 50 years after the bombing, when the Smithsonian tried to present a retrospective about the bomb, what riled veterans was any mention of "vengeance" as a motive for the decision to go ahead. These U.S. G.I.s had experienced the nuclear blasts as reprieves from further combat, from the awful prospect of invading the Japanese islands. Yet it is hard to dismiss the revenge component. We've all lived bathed in it in recent years. A similar emotion rallied support behind George W. Bush's irresponsible war of choice on Iraq -- and lingers, underlying the unconsidered acquiescence President Obama is still getting for his Afghanistan folly. "They attacked New York and the Pentagon. We'll show 'em."

With the power of nukes, the destructive potential of war making has advanced beyond what the planet can survive. Revenge is no longer an allowable luxury. We have to create the conditions that enable leaders to give it up.
***
A Londoner ruminated wisely about overcoming "terrorism" on the fourth anniversary of the bombings in his city's underground trains in 2005:

Four years on, the level of fear in London is back to what it was on 6th July 2005. People carry on their lives quite happily. The underground is packed with people not even giving a thought to the possibility of being blown up on the way to work. The majority of commuters this morning will not even remember that today is the anniversary of those deeply unpleasant events.

This is the best memorial.

Email ThisBlogThis!Share to TwitterShare to FacebookShare to Pinterest
Labels: gone but not forgotten, history, peace movement

"We live in enough of a democracy" is a chilling thought--especially in light of events of this week by corporations opposed to health care reform.

True democracy was shredded when the lobbyists became powerful with their deep pockets. I have often thought that we citizens should start trying to change the way our politicians are elected and eliminate the horrendous amount of money needed to get elected. Until that happens, there will be no true democracy of the people.

Regarding the nuclear weapons, I am reminded of what Paul Newman said, "It only takes one match to blow up a basement full of gas."

The world had better realize this and do away with all nuclear weapons before it destroys itself.

Harry Truman was actually a fairly evil character, put into power by the Missouri/Midwestern branch of what we would call organized crime, but that doesn't change the truth of what you and the authors are saying.

I've been seriously worried about another nuclear flareup ever since the opera "Doctor Atomic" appeared. Artists tend to be weird barometers.