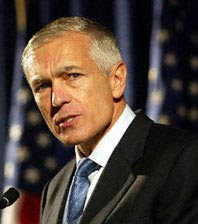 Retired General Wesley Clark is a respected former commander of NATO; nonetheless he is writing downright ignorant things about U.S. war in Vietnam as he cautions the Obama administration on its war in Afghanistan. This paragraph is simply nonsense:

The similarities to Vietnam are ominous. There, too, an insurgency was led and supported from outside the borders of the state in which our troops were fighting. There, too, sanctuaries across international borders stymied U.S. military efforts. There, too, broader political-strategic considerations weighed against military expansion of the conflict and forecast further struggles in the region.

The United States may have thought North Vietnam was a foreign country "invading" South Vietnam -- the Vietnamese never did. The vast majority of them thought they lived in one country arbitrarily divided by foreign invaders.

Like the nationalist Vietnamese, many Pashtun Afghans and Pakistanis apparently have no truck with the "border" bequeathed to them by the departing colonial empire. Taliban "sanctuaries" in Pakistan probably look like where Uncle Mohammed lives in his family compound to many Afghans. The area got by, insofar as it did, when central governments in both countries left people alone and didn't attempt to impose an outside hegemony. If local governments couldn't prevail in these mountains, how likely is it that a foreign power 15000 miles around the world can establish control?

"Broader political-strategic considerations" perhaps should have "weighed against military expansion" in Vietnam -- but once a series U.S. leaders got in further and further over their heads in a hopeless morass, U.S. troops and bombers managed to devastate and destabilize all the countries of the area. It took those countries -- Cambodia, Laos and Vietnam -- a generation to get back on anything like an even keel. We're drifting in that direction once again -- in the middle of a region dominated by two hostile nuclear powers.

Escalating in Afghanistan is simply foolish -- and for General Clark to be misrepresenting the U.S. experience in Vietnam won't help.

Posted by janinsanfran at 4:43 PM

Thanks for your information. I didn't read Wesley Clark's article so had not thought this through. You have done a good job of pointing out his errors.