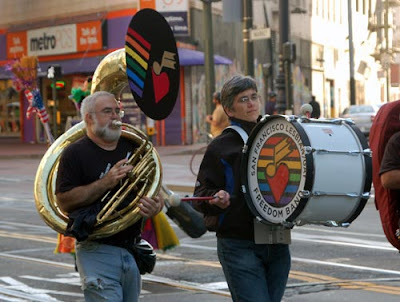 Equality California, the 800 pound gorilla at the hub of the gay and lesbian marriage fight in the state, has made a sensible decision:

After reviewing all the information, research and feedback from our coalition partners and the community-at-large and in view of our aggressive determination and dedication to win marriage back as soon as possible, we support committing our energy, resources and leadership to helping the community win a ballot initiative to restore marriage at the November 2012 election.

That is, they haven't let themselves be stampeded into trying to go back to the ballot in 2010. Cheers for good judgment! That last item is important. This struggle is already won in society, at least in California. Gay marriage is simply not an issue among younger people. It is going to happen. The only issue is when.
Posted by janinsanfran at 2:30 PM

Love your new light background and design. Thanks for publishing this place for so many years, and you've been doing much more than throwing sand on gears. Your tendency is to illuminate issues, and you're great at it.

With much admiration and affection.