Why health care reform is hard 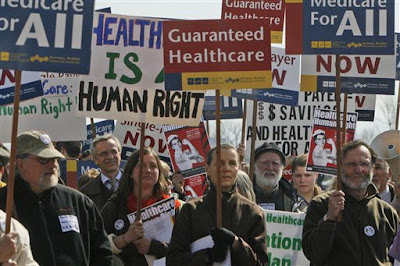 Health care reform is not morally complicated. Unless you like your country ruthlessly selfish and amoral, the issue is clear: guaranteed access to affordable health care should be a right for residents of the richest country on earth. Every other country that can afford this does it. The United States should to. How complicated is that? There are implementation issues, but there should be no question about policy objectives.

What turns out to be complicated is that our political system makes it very difficult deliver what should be a simple imperative. This post is a catalogue of the obstacles from an old campaigner. The obstacles can be overcome, but the list reveals a lot about the incompleteness of our famous democracy.

The President: this Obama guy's attachment to "bipartisanship" was probably a necessity to get where he is today. A Black man couldn't win by just replicating the behavior of the many politicians who win constituents by "doing their hating for them." (That's Rick Perlstein's phrase describing a Nixonland style of politics of resentment.) He has a lifetime of convincing skeptical people that he's a safe, rational guy. But in this, as in everything, he's up against the haters who are mobilized against him. So, as Paul Krugman points out, he's been coming off as

... weirdly reluctant to make the moral case for universal care, weirdly unable to show passion on the issue, weirdly diffident even about the blatant lies from the right.

He needed that rational affect to get elected -- it hurts him in pitched battle over his policy agenda.

The Senate: the geniuses (that's sincere) who cobbled together our system of government put the Senate into the Constitution to temper the populist passions (mostly assaults on property) they feared would hold sway in the House of Representatives. It also mollified small state leaders who feared they'd be swamped by large states. So a couple of guys from North Dakota and Montana, who together represent about the same number of people who live in the city of Philadelphia, can gum up the works for the whole country as Max Baucus and Kent Conrad are currently doing.

The Senate has undergone several waves of reform (direct election; lower standards for filibusters; less power to seniority) since it was invented. If it blocks health care reform, look for more pressure to change the rules. Senate reform may be a reform whose time has come. As it stands, we get Ezra Klein writing stuff like this at a Washington Post policy blog:

The main thing we could do to improve the functioning of the legislative process would be to dissolve the U.S. Senate. Its composition is wildly anti-democratic, its rules are aggressively anti-majoritarian, and its culture holds all this aloft as a good thing.

The House of Representatives: if the problem with the Senate is that Senators get to live above the fray, the problem with the House is that, having to campaign for office every two years, they tend to come cheap for the funders of campaigns. They scare easy at the prospect of a challenger; in a sea of undistinguished colleagues, most of them come off as empty suits buffeted by competing demands, but ever alert for the calls of funder and lobbyists. Still, they are the closest to the people of any part of our government and they've shown it in the health care reform debate. If we want to get reform done, we need to support those who support us. See my post here.

The merchants of confusion: There are, of course, people who don't want you to think health care is a moral issue. In fact, they want you to believe you couldn't possibly understand the issues. Mostly, they are folks who make a profit from selling medical care, drugs, and above all insurance. (Aside from the insurers and the drug companies, some of them also do care if you are sick and try to help you, if it is not too costly for them.) For them, health policy is complicated, because they are continually redesigning the system so they can make the most money out of it for themselves. They are fighting for survival and will do anything they have to do to hang on to their profits.

We're living through a test of our democracy: can it overcome the selfish private interests of the health profiteers in order to achieve health care reform? They have always been slippery, deceitful and vicious in holding on to what they have; can we pry some fairness away from them?

We the people: did you know that there is almost a one to one correspondence between those people who have health insurance and those who vote? That creates some friction, because we the voters can get scared by the idea that bringing into the system all the 45 million folks or so who are now without health access might somehow mean we have less access. We know that health care costs more and more and that staying insured is more and more chancy and arbitrary. That last is true even if we are old enough to be on Medicare: what if the country decides caring for old people costs too much?

We the voters have a choice -- it's the basic choice that always confronts a democracy. Do we want to use the political influence our participation gives us to hang on to what we have? Or can we dare to believe that sharing what we have will mean that we all will live more abundantly? Like all major social choices, the health care reform debate is about a choice between fear -- a death grip on our existing entitlements -- or hope -- risking change in the belief that a better society is possible. Last November we chose hope over fear; will we persist in demanding change or will timidity prevail?

Democracy is a lot of work.

This post is my contribution to Elders for Health Care Reform Day.

Posted by janinsanfran at 10:52 AM

As usual, Jan, your post is well thought out and provides a very intelligent slant on the issue of health care reform. I hope everyone reads it.

Great catalog. And thanks for quoting me below!

The other day, I received an interesting and very instructive e-mail from my brother Jeff who lives in France. He asked me to share it with the readers of my blog. I think I will share it with you also.

“As an American who has been living in Europe for most of the last 20 years, one who has visited doctors numerous times in four different countries, whose two children were brought into this world in European hospitals (France and England), who has himself spent a week in a public British hospital, and who underwent an operation in a private British clinic, I think I can say a thing or two about health care in Europe.

“Our out of pocket expenses for the births? Zero, even though in France my wife spent 5 days in the hospital after the birth, which is standard, by the way.

“During the three years we lived in England, we never once paid for medicine for our children. Children get drugs for free in the UK. Visits to the GP are free for everybody.

“My expenses for the week in the NHS hospital? Zero.

“The cost of the operation in the private clinic? Zero, it was covered by my work insurance, as was the post-op physical therapy I needed.

“In Western Europe you would never be forced to sell your home in order to pay for your medical bills, as happens all too often in America when catastrophic illness strikes and the insurance company decides that your condition was ‘pre-existing’.

“The quality of the care? Mostly good. French hospitals are excellent, even the food is decent. The food at the NHS hospital was beyond awful, but then again most English food is pretty bad (though they do have great Indian food). At night, they were understaffed, but I am guessing that, apart from that place where Dr. House works, most American hospitals are understaffed at night, too.

“In short, in the US, you pay more, get less, and die younger than we do in Europe. What part of that don’t you understand?

“My fellow Americans, you have nothing to fear except those who would use fear to keep you enslaved to the myth of the might of the American health care system.”

What can I tell you? The guy is a Communist. Not only does he live in France, he actually likes it there. An eternal shame to our family's good name. Let us boil down his seven paragraphs to their juicy essentials, shall we?

HEALTH CARE IN THIS COUNTRY STINKS.

Here is (Excuse me, I meant to say, “Here was“) a golden opportunity for real reform and the idiotic Americans are screaming about socialism. Is it any wonder that we have become the laughingstock of the Western world?

"Hope over fear" is a great slogan! While I've lost hope that we'll get the major reform we need, I'm still hopeful that positive changes can happen. Thanks for your post.

Terrific, Jan. How do you respond to George Lakoff's "The American Plan"? Read it over at Hattie's Web.

So glad to be moving to a smaller place than NYC. Do you believe that Chas. Rangel, my Rep here has not signed on as one of the 60 for public option? Sad that too many people in Harlem--ones that really need better plan more than me--could get excited about Obama's election but were not kept better informed about issues.

Group of doctors starting out in Portland on cross country trip for single-payer. https://madashelldoctorstour.com/ and it's invigorating to know I'll be there to see them off.