Health reform shorts:
Do we really want that public option? 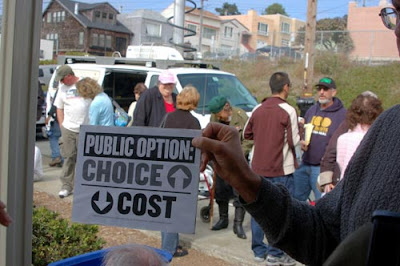 Looks like most of us don't know. Polls conflict, some showing huge approval -- others not so much. This story casts some light on the conflicting answers we see:

... consider this question: Should we repeal the 1975 Public Affairs Act? Very, very few Americans should have a pre-existing opinion since no such act ever passed. Yet that did not stop 30% to 40% from agreeing or disagreeing that the non-existent Act should be repealed on survey experiments conducted by George Bishop and University of Cincinnati colleagues in the mid 1970s.

What Bishop and others have learned over the years is that survey respondents work hard to answer questions and that they frequently form those answers on the spot based on underlying values tapped by cues in the question language. Twenty years later, for example, the Washington Post's Richard Morin modified the experiment and found that when the question informed respondents that either "President Clinton" or the "Republicans in Congress" wanted to repeal the non-existent law, responses polarized along partisan lines.

So how many Americans are familiar enough with the "public option" to have real, pre-existing opinions about it? I am guessing very few, but unfortunately, few pollsters have tried to tackle that particularly challenging question.

Blumenthal's observations agree completely with my years of going door to door to talk with voters during elections. People seldom have very formed opinions about policy issues. They have loose affinities -- a sense that some candidate or party is "on their side." Lots of them couldn't tell you why, but they know.

And above all, if you ask them a question about something they don't understand, most are not going to admit ignorance. The one thing you can be sure that all of us learned from being schooled is: don't look stupid. Folks guess, usually answering what they think you might want to hear. (That can be very informative if you are listening.)

Does this mean that President Obama and the Democrats have failed to explain the "public option" well? Yes.

If they'd advocated for something like "a choice for coverage that will make sure insurance companies can't rip-off anyone" they'd have boosted support -- among people who trust government. But they'd have brought down the visible wrath of the insurance companies on themselves and had to make a public fight about that, something most Democrats evidently don't want. They understand that most people don't like it when the public arena is filled with anger. (Obviously, the Republicans know that too and they are providing lots of furious scenes.) A more assertive definition of the public option would cost Dems campaign contributions, not only from the insurance giants, but also from the entire financial sector that plays in the same funny money arena.

The Blumenthal piece quoted above makes it pretty clear that, in terms of actual public preferences, the "public option" is still so little understood that some version could be sold if real effort was made at selling.

So -- it's up to people who want universal health coverage to 1) hammer the President to use his bully pulpit; here's a link for that. 2) hammer our Congresspeople to legislate for accessible, affordable universal quality care. Start here. 3) Talk with and listen to people we know about health care reform. Educate ourselves -- here's a good place to start. [.pdf]
Posted by janinsanfran at 9:52 AM

Nice post, Jan. I got here from the Civic Center link, and I will be coming back.