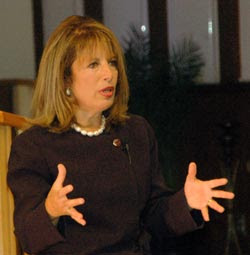 That exchange about summarized the mood at last night's 200 person event in the southernmost reaches of San Francisco in the Outer Mission-Ingleside neighborhood alongside the huge Park Merced rental housing complex.

The Congresswoman represents California's 12th Congressional District, having succeeded Tom Lantos when the later died in mid-term in early 2008. She's a longtime Democratic fixture on the Peninsula, still best known as having nearly been murdered as a young aide to Congressman Leo Ryan who was killed during the Jonestown massacre in 1978. Subsequently a member of the California legislature, she accumulated a strong record of working for various consumer-oriented reforms and of climbing the Democratic Party hierarchy.

She's smart and she gives good townhall, at least where the questioners mostly come from her left. Accordingly to her figures, 46,000 people in her affluent district would gain access to health care if the House bill were enacted. 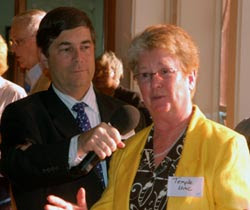 A pediatrician asked about continued funding for children's health. Another questioner asked about "rationing". Speier pointed out that there is rationing now. At San Mateo General, poor patients wait four months for a doctor visit and as much as a year for non-emergency surgery. 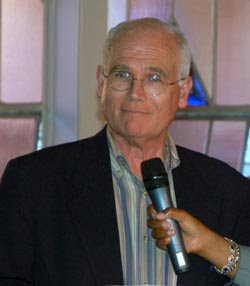 One questioner was concerned about costs; where was the money going to come from? Someone else asked about limiting malpractice damages; Speier supports California's caps on "pain and suffering" litigation, a measure she voted for in Sacramento. But nothing like that is likely in the current national reform.

Another man pointed out that there always seemed to be federal money for wars. Speier agreed that Washington had skewed priorities. She pointed out that somehow the Treasury had come up with $200 billion to bail out the insurance giant AIG.

The crowd was full of advocates of a single-payer system and/or of "Medicare for all".

Speier was asked whether she would stick up for the public option by refusing to vote for any bill that didn't have it. (The "public option" is the name of a new government competitor to the insurance companies that would be available in part of the health care market. It is expected to have lower costs than for-profit plans and to force them, through competition, to improve their practices if they want to retain market share.) Speier hedged. She's supports the public option; she is one of the 57 signers of a letter to Speaker Nancy Pelosi asking that it be retained in the House bill; but she is determined to pass some kind of reform, indicating she might be willing to live without this part of the proposed package.

She thrilled the crowd by saying she did support the Kucinich amendment that would allow states to experiment with their own single-payer health plans. As a member of California legislature, she has voted for single-payer plans that were vetoed by Governor Schwarzenegger. 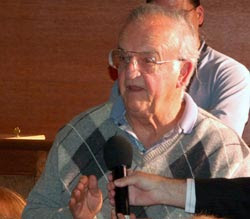 Speier seemed to concur: "It's all about leadership ..."

Then she tossed it back to us. Not everywhere she goes is like this meeting -- we need to persuade more of our friends and neighbors if we want to see quality, affordable health care mandated for all.

It's nice to know that one part of the country have enlightened people who want real answers and ask intelligent questions. Too bad some other parts of the U. S. are swarming with organized screamers.

Finally some intelligent dialogue on this health care mess. I don't think the govt can run anything efficiently. I've been an ERRN for 33 yrs. I work with the fallout of onerous govt intrusion. Don't get me wrong there are issues that need to be fixed. The first would be some sort of reform of a system that allows lawyers to sue and win for anything. Bad things do happen to good people. To address the problem maybe there could be some sort of non partisan professional board to research complaints. The second would be reform of a system that allows for absolutely NO personal responsibility. There are consequences for behavior.
We need more competition not less. The govt has an unlimited pot from which to draw cash, including printing it. Can you see where eventually they could just squeeze out the private ins. co?
A freer market place for health care would allow the consumer to decide and choose. Companies that fit their requirements would get business, unresponsive companies would go out of business. Free maket capitalism works.

The Kucinich amendment is a trap, luring people to accept truly awful Obamacare and shutting the door on real health reform for years to come. All for what? The technical Kucinich amendment does very little even for a single state.

Look at Speier. On one hand, she is willing to pass anything, even without a public option. On other hand, she says she voted for single payer in the California legislature. Yup, a lot of Dems voted for it knowing Schwarzenegger would veto it. Now we are supposed to elect a Democratic governor first, then pass single payer in California. Gee, we elected a Democratic president who promised "change you can believe in," and what did we get?

Keep pushing for HR 676, Medicare for All. Oppose Obamacare. Period.