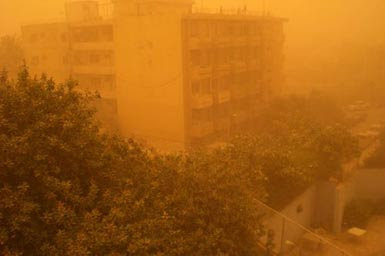 Laith took that picture of a Baghdad sand storm on July 29. He reports that the high temperature that day was 109F -- perhaps falling to 83F overnight. And he wonders, why, after six years, his city still only gets about 5 hours of electric power a day? No electricity means no air conditioning.

I don't know what the Iraqi ministry of electricity was doing during six years since the invasion but definitely it did not implement any project because the power supply did not improve, on the contrary, it became worse. As an Iraqi man, I can not trust any more what the Iraqi government say about rebuilding this country.

Laith works for a U.S. newspaper; he's certainly no fan of the bad old regime. But he does remember expecting his city to have electricity. Before. Before the U.S. came marching in.

On top of the physical insecurity, this is what we're leaving Iraqis.
Posted by janinsanfran at 5:27 AM

I wish we could shove Cheney, Bush, Rumsfeld, Wolfowitz, Pearl, et al, in a cell in Iraq and threaten them with torture if they complained.

Those poor Iraqi people; what a terrible thing we did to their country. I'll bet they wish they had Saddam back; at least he kept the country's utilities going.