What's it like to fight and die for nothing? 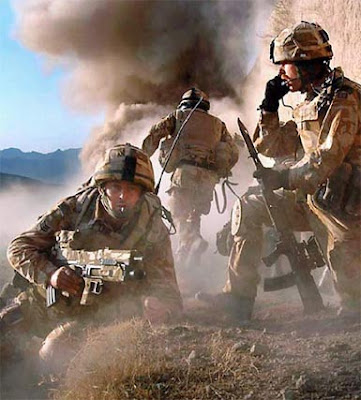 Over 20 soldiers from the Welsh Guards' unit of the British Army have died in the current offensive against the Taliban in Afghanistan. The Independent (UK) has published what amounts to a wail of grief over the loss of these men in a conflict which an anonymous captain in their unit sees as endless and unavailing.

We are dealing here with a tenacious and stubborn enemy. Despite our dropping bombs on compounds that the enemy is using as firing-points, the very next day, new enemy fighters are back. ... Their numbers seem to stay constant, as opposed to decreasing --- all of which gives a strong indication that we will not be able to reduce their numbers to a level where they are tactically defeated.

It seems increasingly true that a stable Afghanistan will only be possible with some sort of agreement, involvement or power-sharing deal with the Taliban.

However, as the British Army units here are increasingly sucked into the turmoil of the latest "fighting season" there seems little evidence that anything is happening on the political and diplomatic stage. In the meantime, tour follows tour, during which the most intense fighting appears to achieve not much more than extremely effectively inflicting casualties on both sides, whilst Afghanistan remains the sick man of Central Asia.

The author is a veteran of two tours in Iraq, but somehow fighting in Afghanistan is more debilitating. He describes his reactions to fellow soldiers dying:

With each death I think each of us experiences a feeling of total shock, powerlessness and impotence. Within your mind you feel you have to do something, especially if you knew the individual. Back at home that might be to jump in the car and drive to some secluded spot where you can get out and scream at the top of your lungs to let out all the anguish. But here nothing of the sort is possible. You are all enclosed within your camp or patrol base; there is no refuge, no private corner to go to, to deal with your grief.

Around you everything else has to continue, and cannot stop. The radios still have to be manned and answered, the patrols still have to be planned, the convoys have to be organised. It is not as if you can take a day off to deal with the grief, to come to terms with it. And even if you could, what good would that do?

... I am just speaking for those of us who deal with the deaths and injuries in Afghanistan indirectly, as an explosion in the distance, followed by a report on the radio, then a helicopter coming in to pick up the casualty.

As for those who deal directly with the deaths and injuries, who have to go into the Viking vehicles after the explosion to pull out the casualties, who have to tourniquet the remaining stumps after both the legs of a person have been blown off, those who have to pick up the leftover pulpy fragments of a disintegrated body and put them into a bag, I am not sure how they react.

I would imagine in a similar way to the rest of us: you put it aside as soon as you can, as there is nothing to be achieved in thinking about it. All you will do is think yourself into a corner, where you are faced with the absurdity and horrid waste of it all. And if you let that take a hold, how are you meant to perform, drag yourself out of your tent at 4am after just three hours sleep, to go on another foot patrol, another 18-hour convoy, another 12-hour shift in the operations room?

How long will citizens of the United Kingdom be willing to keep sending their people into this fruitless hellhole? The Netherlands will leave Afghanistan in 2010 and Canada in 2011. Eventually Afghanistan will be a solely U.S. war, without an understandable mission and costing billions this country doesn't have. Just why is the United States so committed to this futility? Can't all the genius of the security apparatus be put to figuring out a less costly, in lives and money, way to ensure that some wackos in caves in distant mountains don't pull off another 9/11?

One gets the sense that our military is hamstrung by its procurement successes: got weapons of massive destruction, must use them. Hammer, meet nail. There has to be a better way.

Posted by janinsanfran at 2:18 PM

Dear Anonymous friend: your long comment was "off topic" or at least excesively detached from the discussion encouraged here, so I deleted it.

I have no doubt there are folks who would like to engage with what you discuss. May I propose you get your own blog?