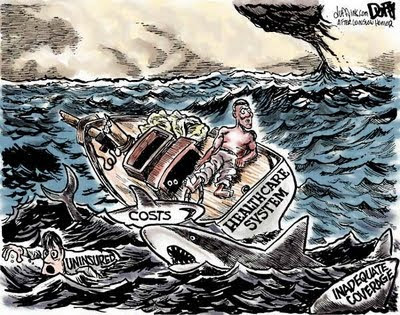 Over at Time Goes By, Ronni Bennett is linking all the posts reported so far. To prime my own pump, I just read through some. Some snippets [my emphasis]:

For Ronni, health care reform is a moral issue:

Here is my question for elders who have Medicare and younger people who have private coverage who oppose health care reform: why is it all right for you to be well cared for by your physician while tens of millions of other Americans are not? How do you justify that?

For some elders, this debate raises up the truth they'd prefer not to think about.

Modern medicine is both wonderful and cruel, amazing advancements have been made over the years, but we have outlandish expectations for miracle cures. We are all living longer and the way the health service works will have to change. Illnesses such as cancer, once considered fatal, are now becoming chronic. Joints and internal organs can be replaced, but there is no such thing as a free lunch… the price is often with (like me) constant reviews and extra medication all costing the state and our pockets to stretch a very long way. We seem to have forgotten that we must die at some stage. I would like to live for another ten to fifteen years, but please don’t keep me hanging on like a vegetable, for another twenty, thirty or forty years, somebody show mercy, open the door and push me outside the igloo!

We can't fight off time's changes forever (and may not want to), but right now we can show the President we want real health care reform:

Get involved. Sign the message to the President at this site.

Thanks to The Tempered Optimist for that last link.
Posted by janinsanfran at 7:39 AM