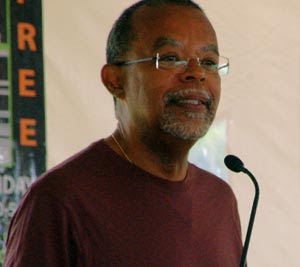 When Professor Henry Louis Gates Jr. fulfilled a long-standing commitment to read at the Martha's Vineyard Book Fair this morning, he drew a crowd. 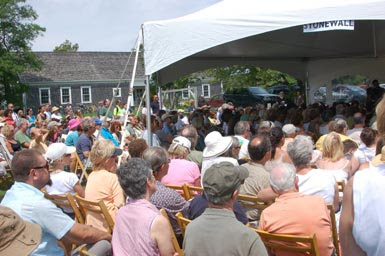 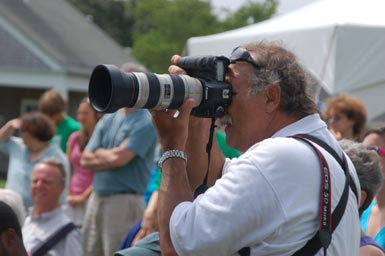 The good doctor is something of a known quantity here, but his recent celebrity thanks to Cambridge's Officer Crowley has kicked media interest in him up many notches.

His project -- tracing African American family trees -- embodied in In Search of Our Roots, both highlights the peoples' history in those ancestries and reveals the polyglot genetic origins of this country's population.

Rather to my surprise, Gates talked about aspects of his recent unpleasantness I had not known about. Apparently when a Black man attracts that much attention in a racially charged situation, the consequence is angry phone calls and death threats. (The Cambridge police department published his private, unlisted landline and cell numbers in their public report.) Harvard is urging him to move; his home has become dangerously visible to cranks.

A reporter asked Gates what the arrest brouhaha had meant to him personally. He said he was still trying to figure out. But he did say that the night before he went to DC for the White House visit, he dreamt he was arrested at the White House. Guess this sort of thing can throw you, even if you work at Harvard.

***
Frank Rich had an insightful column on the Crowley-Gates circus in today's New York Times. He chalks up the extraordinary media enthusiasm for the story to commercial media exploitation of white anxiety caused by the demographic fact that this is ceasing to be a white country.

What provokes their angry and nonsensical cries of racism is sheer desperation: an entire country is changing faster than these white guys bargained for.

This Californian wants to point out that, despite its other problems, the experience of my state suggests that we might get through this transition more rapidly than the national media fixation would suggest.

In the mid-1990s, seeing the California electorate whipped into a racist frenzy by Republicans who exploited fear of immigrants and affirmative action to keep some waning power, some of us warned, "California is becoming the new Alabama." And so it seemed.

But after doing pretty well for a couple of turns, the purveyors of racial fear have completely marginalized themselves; aside from the Terminator's freak show election, Republicans haven't won statewide office in ten years. Not only are more people of color claiming their rightful place in the process, but also a significant fraction of white Californians have got over their expectation that their country will look like them. It never got as bad as it looked like it might -- perhaps the whole nation can also come to terms with reality more rapidly than we think. Perhaps that's why we elected Obama.

Posted by janinsanfran at 2:50 PM

After 200 years one would think we would grow up. Maybe there's hope for us, yet.

I do hope the Lou Dobbs, Rush Limbaughs, Bill O'Reillys and others would lose more of there right wing followers and be canceled by the networks. (Hey, I can dream, can't I?)