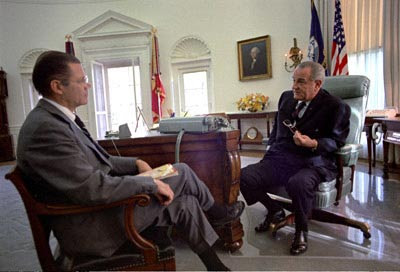 I just got around to viewing Errol Morris' film Fog of War. I've been hanging on to the DVD so long its subject, Robert McNamara, died while it sat in its Netflix wrapper.

As Secretary of Defense (War) in the early and mid-1960s, McNamara was one of a trio of political figures -- along with President Lyndon Johnson and Secretary of State Dean Rusk -- who I hated as war criminals during those awful years when they were sending guys my age off to die in their war to eradicate Vietnamese nationalism. I didn't find the old man's apologia for that horror particularly appealing or enlightening, even today.

But there were a couple of moments in the film that opened up possibilities I'd not thought much about.

For one, if McNamara hadn't been lured to Washington by President Kennedy, this country might still have an auto industry. He had just been made president of the Ford Motor Company. His claim to fame was introducing a small car (the Fairlane; my parents had a series) to compete with the VW Beetle. A guy in the center of the auto industry back then who was smart enough to compete with the Beetle could have set U.S. manufacturers on a different path.

Also, the film shows McNamara reduced to looking like a stammering, simmering little boy when being awarded a Presidential medal by Lyndon Johnson. This was after Johnson had fired him from leading a war effort that he claims to have known was doomed from early on and that was destroying Johnson's reputation.

Lately I've been trying to understand more about Johnson. Back then, I hated him so much because of the war, I didn't appreciate his accomplishment in getting both our core civil rights legislation and Medicare through a Congress probably more conservative than the one we have today. Johnson was apparently a very unpleasant, bullying legislative genius. He seems to have had a knack for making powerful grown men dependent on his approval. The scene (contemporary footage) showing McNamara pathetically grateful to this seemingly indifferent President is searing. No wonder Johnson beat Congress into submission -- and no wonder he couldn't imagine a people that would hold out against U.S. firepower.

Worth seeing.
Posted by janinsanfran at 11:51 AM

Sometimes the twists of fate can determine the direction of an entire nation, such as you mentioned in McNamara's leaving the auto industry. And it can be devastating to the country such as when the Florida recount was decided by a conservative political Supreme Court.

Not strictly on-topic, but I had to chuckle when I saw that you are the same kind of ideal NetFlix customer* that I am. I think our record was the Wallace & Gromit disc that was here for nine months. (Though in that case at least we watched it repeatedly...)


*from the NetFlix bottom-line point of view

Nell -- it might not surprise you to learn that Wallace an Grommit is the only DVD we own. :-)