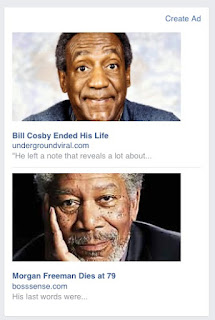 I'm feeling a little rant about Facebook. Why should I have to look at bullshit like what I've posted next to this?

Both these ads are obvious fakes. Both gents are alive and more or less kicking. But somebody pays Mark Zuckerberg to show them to me in the vain hope that I'll click on them.

And this crap is inescapable. I have no control over what turns up next to my feed -- and no control over what turns up in my feed. Twenty percent or so of that seems to consist of planted garbage from institutions that some friend incautiously "liked" at some point. I mean, I don't hate the National Geographic or Amnesty International, but if want to relate to them I can visit their digital premises. In no sense have I asked for them just because someone I know "liked" them once.

I didn't like AOL back in the day -- that ancient (1983-2009) connectivity service tried to give us a diminished internet selected to meet AOL's commercial needs. AOL mailed half the population floppy disks in the hope we'd sign on. Many did, for awhile, till they discovered they didn't need it to venture online. AOL merged with/purchased Time-Warner as the temporarily more valuable partner in 2000. But most of us wanted an unfiltered web and that old AOL died of disuse.

But the unconstrained potential of the web apparently was too much for us. These days most all of us have allowed ourselves to be corralled in Zuckerberg's stable. I'd never look at Facebook except that too many of my friends and acquaintances who want to comment on my blog seem to live there. I try to be polite and friendly. I show courteous interest in others. I respond if contacted. But dammit, the space is a commercial playpen! I'd be quite happy if I never had to look at it again.

Anyone want to tell me what is good about Facebook?
Posted by janinsanfran at 5:00 AM

Jan, I use F.B. Purity to filer out all ads. You can tailor it to your own satisfaction to see what you want on FB. FBPurity dot com.

I too use FB Purity. I also use Adblock Plus. I use Facebook to keep in touch. I used it as I worked my way across the US in 2015 and will use it again next week and beyond as I drive to San Francisco and back - assuming the car gets fixed. It is critical in my life as some of my friends don't have smart phones but do have Facebook and Messenger.

If you use Chrome add the extension that changes Trump photos to kittens. Improves the experience immensely.

If it's commercially planted (and as you point out, 20% of it is), and I don't want to see effing Amnesty International or whoever, I go up to the top right little drop-down menu on the post and click on "Hide All Posts from Amnesty International". Just means you are going to get a different set of crap but I've tried to keep it to stuff that is of marginal interest, such as what my employer is paying for and how it looks.

As for Facething deciding which posts of my "friends" to show or not, I find its haphazard censoring of most of them just plain weird. I'm pretty selective in who I follow, so if I'm following them, I want to see what the hell they are publishing.

You use it like I do, to redirect people to my New Yorker-style long-form blog posts if they are interested in the subject. And isn't it a bizarre turn of affairs after blogs were not so long ago considered such a threat to traditional long-form journalism?

An old friend of mine found me on FB, and I keep in touch with several far-flung relatives and friends. There's a lot of junk on FB which I ignore. And I use it mainly to post articles I think are of interest.