Five O'Clock Follies, the Credibility Gap, and the Trump cabal 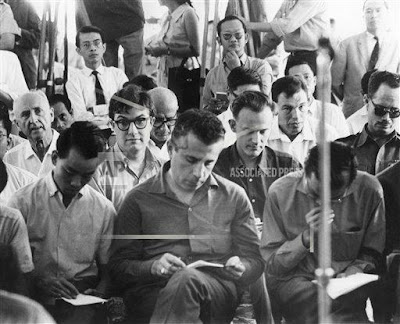 It looks as if the Trump press operation is going to replicate the Five O'Clock Follies. This label was invented by bored and increasingly skeptical journalists in Saigon during the United States' war in Vietnam. It described daily military briefings which consisted of fantastic stories of exaggerated "enemy" body counts (dead Vietnamese) meant to promise an unattainable victory. (Karl Marlantes has described the pressure put on combat leaders to inflate their kills.)

The bullshit spewed by Trump's flack Sean Spicer on Saturday was such a stew of insult and fabrication that the old gray New York Times called it for what it was:

... at the White House, he dispatched Sean Spicer, the press secretary, to the briefing room in the West Wing, where Mr. Spicer scolded reporters and made a series of false statements.

He said news organizations had deliberately misstated the size of the crowd at Mr. Trump’s inauguration on Friday in an attempt to sow divisions at a time when Mr. Trump was trying to unify the country, warning that the new administration would hold them to account.

The statements from the new president and his spokesman came as hundreds of thousands of people protested against Mr. Trump, a crowd that appeared to dwarf the one that gathered the day before when he was sworn in. It was a striking display of invective and grievance at the dawn of a presidency ...

Okay, so we already knew that Trump is a hypersensitive narcissist who can't admit realities that don't cater to his inflated ego. Let's keep reminding media with microphones their responsibility is to the public and the country, not to this puny cry baby.

But back to the original Five O'Clock Follies ... In the early years of the Vietnam war, reporters dutifully reported what they were told. The shared national effort against dictators and fascism in World War II had made the government something close to a trusted source. But gradually they realized that the U.S. government was asking them to participate in a theater of the absurd. That realization was not broadly shared back home in the wars' early years. But as that era's journalists became more cynical, their stories added to what came to be called the Credibility Gap. Many of us in the US came to consider much of what the government tells us, especially about wars of empire, to be presumptively false.

The Credibility Gap born of the Vietnam years has never entirely closed. We are not accustomed to believing what official sources tell us -- because we know they lie -- especially about far-flung imperial adventures. The Iraq war brought this back with a vengeance.

Pretty much the only time the Credibility Gap has narrowed since 1968 has been when we thought ourselves under terrible immediate threat, as immediately after the 9/11 attacks. When we are very afraid, suspending habitual skepticism becomes tempting. We yearn for a good, honest government that will keep us safe -- even when we know we're not likely to get one. In such moments, we're more likely to believe false assertions if the government is peddling them.

The Trump crew is going to have a terrible relationship with the journalistic media because their boss lives in an alternative universe. And people willing to see it already know this, millions of us. The administration can't and won't earn credibility by telling the truth -- that's off the table from the get-go in Trump world.

So the Trump cabal need to keep as many of us as they can scared and helpless. That need is the source of the dire picture of the country Trump peddled at his inauguration.

The antidotes to this Trumpian worldview are courage and self-initiated action. We resist when we practice courage. We resist when we work with others in many different arenas, even if our efforts seem slow and small, to build the more equal, more just, and more loving society that we want. This is the antidote to what the con man and his enablers have to offer. Let's do it.
Posted by janinsanfran at 5:00 AM

Thanks Jan! Your writing has been particularly good lately.