Tuesday was a surreal day in the USA, in two parts 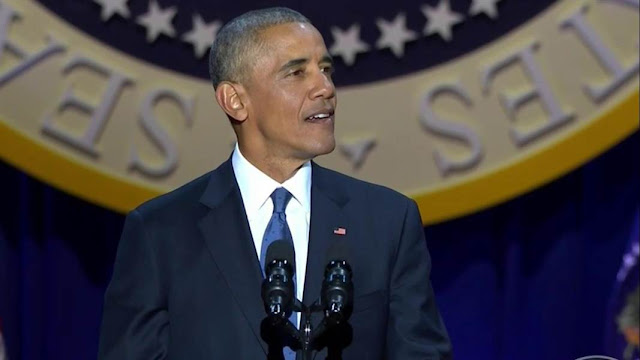 The Prez was at his best in his farewell address, reprising his aspirational vision of this mixed bag of a country and polity.

... Our youth, our drive, our diversity and openness, our boundless capacity for risk and reinvention means that the future should be ours. But that potential will only be realized if our democracy works. ...

... Democracy can buckle when it gives in to fear. ... If the scope of freedom and respect for the rule of law shrinks around the world, the likelihood of war within and between nations increases, and our own freedoms will eventually be threatened. So let’s be vigilant, but not afraid. ...

... It falls to each of us to be ... "anxious, jealous" guardians of our democracy. Embrace the joyous task we have been given to continually try to improve this great nation of ours because, for all our outward differences, we in fact all share the same proud type, the most important office in a democracy, citizen. ...If something needs fixing, then lace up your shoes and do some organizing.

If you missed the speech, it's worth an hour of your time.
***
Meanwhile unconfirmed opposition research dribbled into view which makes this cartoon seem more than metaphorical. 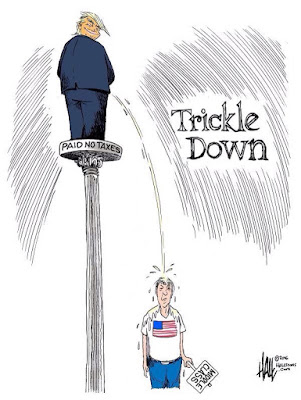 Quite apart from the possibility that the PEOTUS was filmed by the Russians in compromising sexual bullying, a new Quinnipiac University poll finds him with record low approval numbers for a new chief exec. And those numbers have only declined since November.

American voters disapprove 40 - 30 percent of the individuals Trump has nominated for his cabinet, with 28 percent who say they haven't heard enough about them.

Voters support 72 - 22 percent, including 52 - 42 percent among Republicans, a review of Trump's finances to identify possible conflicts of interest.

It's not like he's sailing to office on a wave of popular enthusiasm.

This creates room for resistance. As Republicans in Congress try to use his elevation as an opportunity to enact their long time agenda of bonanzas for the One Percent at the expense of everyone else, they need to be reminded his tweets may not be enough to save them from furious constituents. He just doesn't have enough juice to cover for them. Let's keep calling ...
Posted by janinsanfran at 6:00 AM