In fact, I'd say this matters EVEN more in the Trump era. We must continue to struggle to constrain and prosecute rogue police departments at the local level.

Yes, we must also shine light on the cruelty and racism that will emanate from Washington Republicans and the con man who has eaten them for an appetizer. We must be alert; how far will this go? Will Trump succeed in making lunch of whatever he can grab of the wealth that workers hands and brains have made in this country? Will he gorge on using the state power to crush our imperfect democracy? Struggles at all levels will decide. Some thoughts: 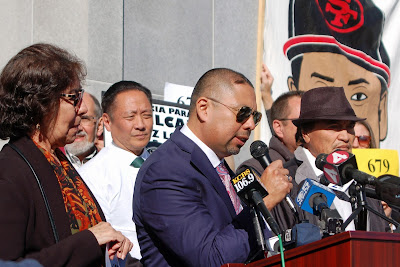 When activist Benjamin Bac Sierra speaks about the SFPD murder of his friend Alex Nieto, he always leads the audience in a chant: "Amor por Alex!" We respond "Amor por Alex!" That's what this struggle for accountability is about. It's about LOVE, love for particular people and for a way of being in society together. Let's try not to forget it.
Posted by janinsanfran at 10:48 AM