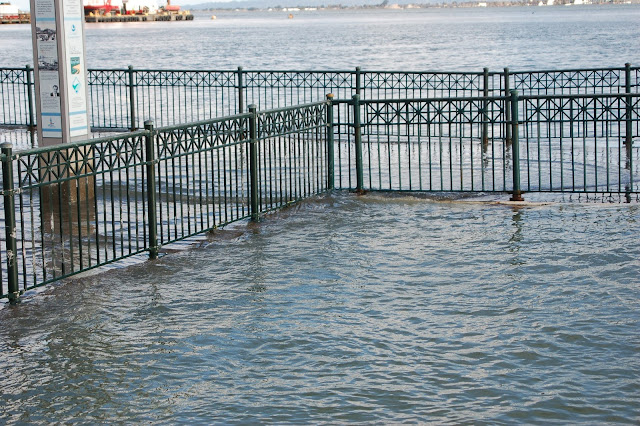 San Francisco Bay came ashore briefly yesterday along the Embarcadero breakwall. This wasn't yet a consequence of rising sea levels due to climate warming/arctic ice melting. It was an instance of a king tide, a super high tide that comes along twice a year in particular alignments of the sun and moon in relation to earth. Nobody who reads tide tables was surprised.

But that doesn't mean that having the Bay come ashore shouldn't worry us. Most of the year, high tides peak at about five feet, four inches; king tides reach seven feet. With rising sea levels, this contained and infrequent rise will become the new norm.

“What we have today is mild coastal flooding that will become the new normal by as early as mid-century,” said [Marina] Psaros, [of the King Tides Project.]

... Some scientists predict that between 2060 and 2070, we may experience tides at the same magnitude as king tides on a monthly basis, due to sea-level rise caused by climate change. ... Even though scientists and planners are able to forecast and prepare for king tides, the tides’ severity can be exacerbated by other naturally occurring episodes, such as flooding, El Niño, and storms. Dramatic increases in water levels have the potential to cause damage to infrastructure, property, and the coastline.

Meanwhile, executives of the Port of San Francisco are raising alarm about the integrity of the seawall that bounds the bay. Much of the city's perimeter depends on this wall to keep a century of building on landfill from flooding. So far it does the job, but they fear it won't survive next time we have an earthquake. And that goes double as the waters rise.

If we want to preserve downtown, this monster construction project will have to be funded somehow. Oh yeah -- and we have a generally hostile, climate change denying adminstration in Washington.

H/t Hoodline for alerting me to this. 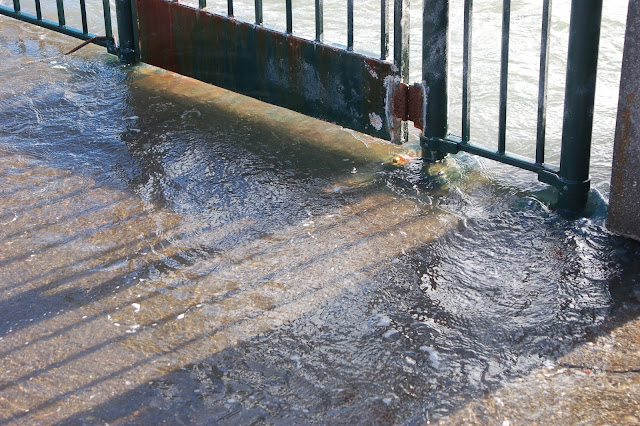 My nephew has had to search out new ways to get from SF to school in San Mateo. Be safe.