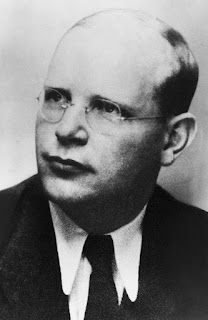 My friend and mentor Fr. John Kirkley, rector of St. James Episcopal Church, spoke highly last spring of a biography of Dietrich Bonhoeffer, the German pastor executed by the Nazis; I read it, blogged about it, and came away more confused than enlightened. This past Advent season, John presented a series of talks about the life and faith journey of Antony, one of the hermetic eremetic Desert Fathers of 3rd century Christianity. He was kind enough to share the text with me. By permission, I am posting here a small segment from those talks that explicates some of Bonhoeffer's thinking. Bonhoeffer's words are inset in the usual style of this blog; the rest is from John.

Reflecting on his own experience of evil, Dietrich Bonhoeffer noted that there are three ways in which we become tempted to participate in the violation of human dignity and the desecration of the earth. The first temptation is the idolization of human power in the face of fear and uncertainty.

The weaknesses of human nature appear more clearly in a storm than in the quiet flow of calmer times. Among the overwhelming majority of people, anxiety, greed, lack of independence, and brutality show themselves to be the mainspring of behavior in the face of unsuspected chance and threats. At such a time the tyrannical despiser of humanity easily makes use of the meanness of the human heart by nourishing it and giving it other names. Anxiety is called responsibility; greed is called industriousness; lack of independence is called solidarity; brutality becomes masterfulness.

By this ingratiating treatment of human weakness, what is base and mean is generated and increased ever anew. The basest contempt for humanity carries on its sinister business under the most holy assertions of love for humanity. The meaner the baseness becomes, the more willing and pliant a tool it is in the hand of the tyrant.

The small number of upright people will be smeared with mud. Their courage is called revolt, their discipline Pharisaism, their independence arbitrariness, and their masterfulness arrogance.

For the tyrannical despiser of humanity, popularity is a sign of the greatest love for humanity. He hides his secret profound distrust of all people behind the stolen words of true community. While he declares himself before the masses as one of them, he praises himself with repulsive vanity and despises the rights of every individual. He considers the people stupid, and they become stupid; he considers them weak, and they become weak; he considers them criminal, and they become criminal. His most holy seriousness is frivolous play; his conventional protestations of solicitude for people are bare-faced cynicism.

Bonhoeffer could be describing the phenomenon of Trumpism in our own time. It is the reversal of all values in which evil is called good, words mean nothing, and freedom is exchanged for mass participation in the elixir of violent power. This is evil in its purest form.

There are, however, more subtle forms of complicity with evil.

Good people, however, who see through all this, who withdraw in disgust from people and leave them to themselves, and who would rather tend to their own gardens than debase themselves in public life, fall prey to the same temptation to contempt for humanity as do bad people. Their contempt for humanity is of course more noble, more upright, but at the same time less fruitful, poorer in deeds. Faced by God’s becoming human, this contempt will stand the test no better than that of the tyrant. The despiser of humanity despises what God has loved, despises the very form of God become human.

This is, perhaps, a peculiarly contemplative temptation: to retreat into interiority and abdicate one’s responsibility for the renewal of the world. Such a retreat betrays an actual contempt for human beings, whether through self-righteousness, sectarianism, or cynical indifference. Here, one perceives the reality of evil but refuses the risk of love.

Finally, Bonhoeffer describes what I call the liberal, humanitarian temptation:

There is, however, also a sincerely intended love for humanity that amounts to the same thing as contempt for humanity. It rests on evaluating human beings according to their dormant values – the health, reasonableness, and goodness deep beneath the surface. (This love for humanity grows mostly in peaceful times. But also in times of great crisis these values can on occasion shine forth and become the basis for a hard-won and honest love for humanity.) With forced tolerance, evil is interpreted as good, meanness is overlooked, and the reprehensible is excused. For various reasons one shies away from a clear No, and finally agrees to everything. One loves a self-made picture of human beings that has little similarity to reality, and one ends up despising the real human being whom God has loved and whose being God has taken on.

Bonhoeffer is describing the temptation to love the world as we would like it to be, rather than as it is, denying or tolerating actual evil in the misguided belief that people and institutions are ultimately good. “He can’t really mean that.” “Oh, that will never happen here.” It can happen here. It has happened here. Though evil, unlike love, cannot endure forever, its reality, however long or short lived, must be acknowledge honestly, resisted, and overcome by the power of authentic love: love that is willing to risk everything for the sake of real human beings and the real world.
Posted by janinsanfran at 5:00 AM