Giddy with glee over terror attacks 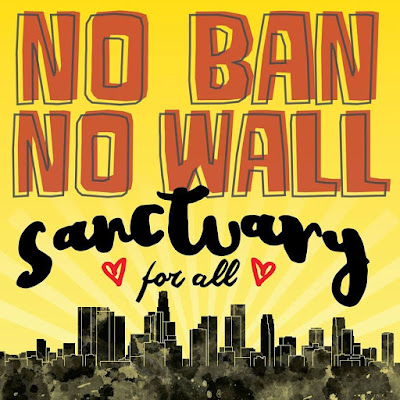 There's one possible response to the Great Tangerine's (partial, so far) Muslim ban that I think those of us who are furious about this latest violation of national decency should steer clear of.

A NY Times article from Saturday morning exemplifies what I think we must avoid:

The unintended consequence of President Trump’s directive, many experts believe, is that it will make the risk [of terrorist attacks] worse.

... the president’s order appears to address not a rational calculation of risks but the visceral fears that terrorists set out to inflame.

The argument boils down to various more and less measured assertions that a blanket prohibition will thrill the Islamphobic segment of the Trump base, but will hurt "homeland" security.

Folks -- get over it. Weakened security, further inflammatory examples of bigotry and mistreatment of Muslims, are a feature, not a bug, for the Trump administration. Terrorism is wonderful for their plans; we're much more compliant when we are shitting in our pants. They need us scared stupid of imams and other bogeys under our beds.

I never was a "9/11 truther" -- a believer in the conspiracy theory that the GW Bush administration had a role in the attacks on New York and DC. But I was always a "delighter" -- Bush, Cheney, Rumsfeld et al. loved them a good made-for-TV terrorism spectacle. It softened up the country for the mad imperial adventures in the Middle East they had long lusted after.

A few small scale terrorist eruptions in this country that can be blamed on Muslims from anywhere in the world including the US itself would make the current administration giddy with glee. Autocrats love terrorism; when not doing it themselves, they use our panic to shore up their unpopular regimes.

Trump's buddy Vladimir Putin rode to power after apparently using the secret police to blow up apartment buildings and blame Chechen separatists. who he warred against. (The Chechens are some pretty nasty customers in their own right; there are NO virtuous terrorists.)

This gleeful delight in terrorism almost certainly doesn't include all the security spooks who are charged with actually preventing terrorism. Many, even most, are no longer the ignorant bigots they were in the immediate aftermath of 9/11. Some still are of course; elements in the FBI, in addition to putting a thumb on the scale for the Great Tangerine against Clinton, harassed random US Muslims in the run up to the November election.

We have to hope that the more responsible spooks in the bureaucracy, and perhaps some inkling that the administration itself might get blamed if they are too obvious about encouraging domestic terrorism, will constrain the Trump administration. The former might be a real obstacle; the latter might prove a weak bulwark if the autocrat feels himself slipping.

Meanwhile, today US airports are engulfed in protest as I write this on Saturday afternoon. A court has issued a partial stay.

We the people are going to have to fix the mess that we the people have made. Resist and protect much.
Posted by janinsanfran at 5:00 AM