Horrors encountered while skimming the news ... 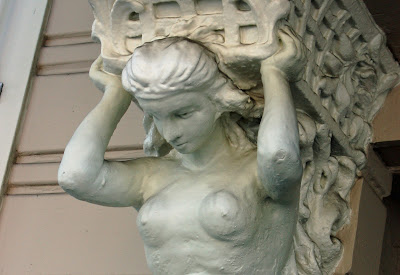 The plastic appurtenances that surgeons implant on the chests of women who have had mastectomies enjoy about as much feeling as this decorative figure's nipples. Yet, those surgeons claim wondrous results and get paid as if they were gods.

In a season of appalling assertions, this is right up there:

“Our focus has been on what women look like,” said Dr. Andrea L. Pusic, a plastic surgeon at Memorial Sloan Kettering Cancer Center who specializes in breast reconstruction and studies patients’ quality of life after breast surgery. “What it feels like to the woman has been a kind of blind spot in breast surgery. That’s the next frontier.”

The focus on how breasts look and feel to other people, rather than how they feel to the patient, speaks to the fact that women are still largely judged by their appearance, said Victoria Pitts-Taylor, a professor and the head of feminist, gender and sexuality studies at Wesleyan University.

“There’s such a strong cultural gaze at women’s breasts,” Dr. Pitts-Taylor said. “It does raise the question: Who is breast reconstruction for?”

If fact, women who go the whole hog on reconstruction encounter a variety of complications and disappointments as the article details.

Having recently accompanied a friend who was planning for radical mastectomies, I've seen how focused the medical profession is on encouraging women to "make themselves whole" by undergoing breast reconstruction. I don't remember whether they told her the things would have feeling. She went without, without internal conflicts.

But why would you want to risk more surgery and pain, if the result was no use to you, only to make you more visually pleasant to others? I don't get it.
Posted by janinsanfran at 5:00 AM

When a friend of mine was diagnosed with Stage 4 breast cancer she said she could not wait to get rid of those nuisances. Fortunately she survived and is in remission after 6 years. She said her golf game improved. It all depends on attitude.