The great sorting on college campuses -- and an exception

Erudite Partner teaches ethics at the University of San Francisco. That's the Jesuit institution, not the state school. She often tells me how interesting the place is, how diverse the student body is, how generally progressive both faculty and students seem.

Well no wonder. The New York Times' Upshot looked a study of the economic demographics of who goes to which colleges (or to college at all) and came up with some stark findings. If your parents were part of the one percent, you have to screw up pretty badly not to have a chance to attend an elite college. If your parents were part of the 60 percent of the population which earns less (often a lot less) than $65K annually, even if you get into one of these places, the largest fraction of your classmates will be children of the one percent.

At 38 colleges in America, including five in the Ivy League – Dartmouth, Princeton, Yale, Penn and Brown – more students came from the top 1 percent of the income scale than from the entire bottom 60 percent.

A few schools are different. And, lo and behold, USF is one of them. 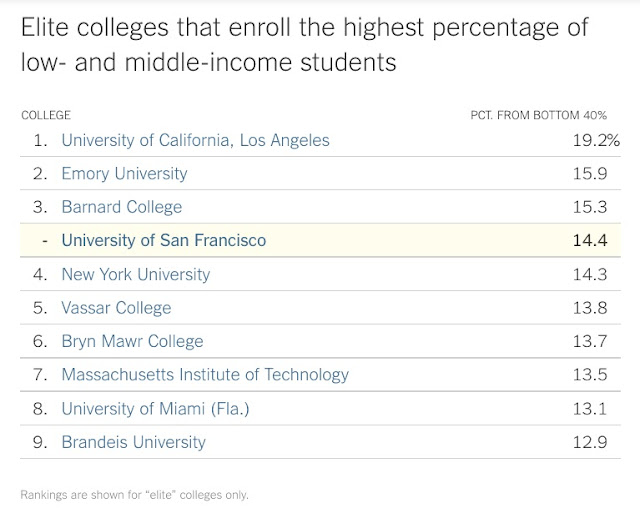 According to the article, 7 percent of USF students come from one percent families while 27 percent derive from families under $65K. Good for USF.
Posted by janinsanfran at 5:00 AM